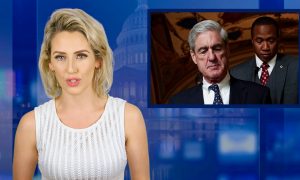 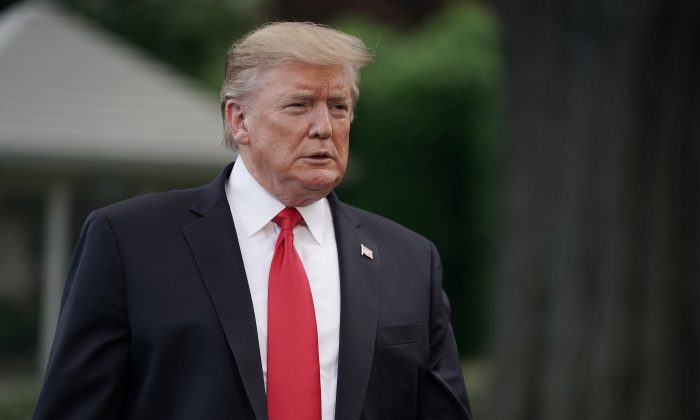 President Donald Trump walks toward journalists in Washington as he departs the White House for a campaign rally in Pennsylvania on May 20, 2019. (Chip Somodevilla/Getty Images)
Trump Administration

Trump, on Twitter, commended Flynn’s previous military service and wished the best for both him and Powell. Flynn hired Powell—a prominent critic of the Justice Department—after he fired his defense counsel on June 6.

“General Michael Flynn, the 33 year war hero who has served with distinction, has not retained a good lawyer, he has retained a GREAT LAWYER, Sidney Powell,” Trump said. “Best Wishes and Good Luck to them both!”

General Michael Flynn, the 33 year war hero who has served with distinction, has not retained a good lawyer, he has retained a GREAT LAWYER, Sidney Powell. Best Wishes and Good Luck to them both!

Powell responded to the president on Twitter, saying she was “honored.”

🎉HAPPY BIRTHDAY!! to you! 🎉#MAGA pic.twitter.com/aOBf2xCGSX

Powell will ask for a 90-day extension in the upcoming status report with the court, because there is “a lot of information to process.”

Powell told The Epoch Times in an interview on June 1 that it was “absurd” that the Department of Justice could suggest bringing up obstruction of justice charges against the president, and criticized the special counsel.

“I was extremely disappointed in Mr. Mueller’s press conference … just completely turns the presumption of innocence upside down and puts the burden on the president to prove that he’s innocent, instead of accepting the burden on the government to prove guilt beyond a reasonable doubt,” she said.

In 2014, Powell authored a book featuring a scathing critique of the Justice Department titled “Licensed to Lie: Exposing Corruption in the Department of Justice.”

Trump’s opponents used the case against Flynn to add fuel to allegations that Trump colluded with Russia to influence the 2016 election. The allegations proved to be unsubstantiated after multiple investigations by Congress, the FBI, and Mueller.

Flynn pleaded guilty to providing false statements to the FBI during a January 2017 interview, as part of a deal to cooperate with Mueller’s team and federal prosecutors.

Flynn also pleaded guilty to lying about his foreign lobbying disclosures, regarding the extent to which his work benefiting the Turkish government was overseen by that government. Foreign lobbying paperwork violations are seldom prosecuted. Flynn said the work started in August 2016. He shut down his lobbying firm in November 2016.