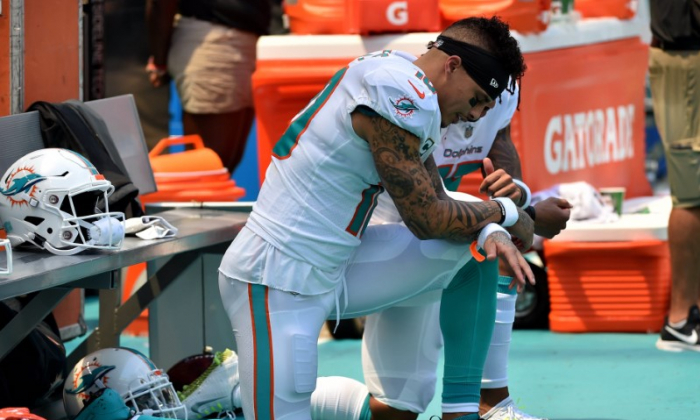 President Donald Trump pointed to historically low television ratings for the National Football League as protests during the U.S. national anthem continued ahead of the first Sunday games of the season.

“Wow, NFL first game ratings are way down over an already really bad last year comparison,” Trump wrote on Twitter. “Viewership declined 13%, the lowest in over a decade. If the players stood proudly for our Flag and Anthem, and it is all shown on broadcast, maybe ratings could come back? Otherwise worse!”

The president cited television ratings for the Sept. 6 NFL game.

Miami Dolphins wide receivers Kenny Stills and Albert Wilson were the only players reported to have knelt before the eight early games kicked off on Sept. 9.

Colin Kaepernick, the progenitor of the national anthem protests, used social media to thank the two players. Kaepernick, the face of a new marketing campaign by Nike, thanked the players for “their unwavering strength by fighting for the oppressed!”

Trump has repeatedly slammed the protests as misdirected and unpatriotic, and has suggested that protesting players be fired.

The NFL owners in May approved a rule requiring players to either stand on the field for the anthem or remain in the locker room, but the policy is on hold, pending discussions with the NFL Players Association.

Kaepernick, who is no longer in the league, remains in the headlines.

He features in a new Nike commercial that was introduced during the first game of the NFL season between the Philadelphia Eagles and Atlanta Falcons on Sept. 6. Trump was quick to slam the campaign.

“Just like the NFL, whose ratings have gone WAY DOWN, Nike is getting absolutely killed with anger and boycotts,” the president wrote on Sept. 5. “I wonder if they had any idea that it would be this way? As far as the NFL is concerned, I just find it hard to watch, and always will, until they stand for the FLAG!”