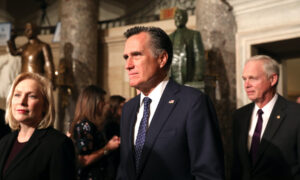 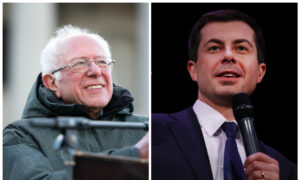 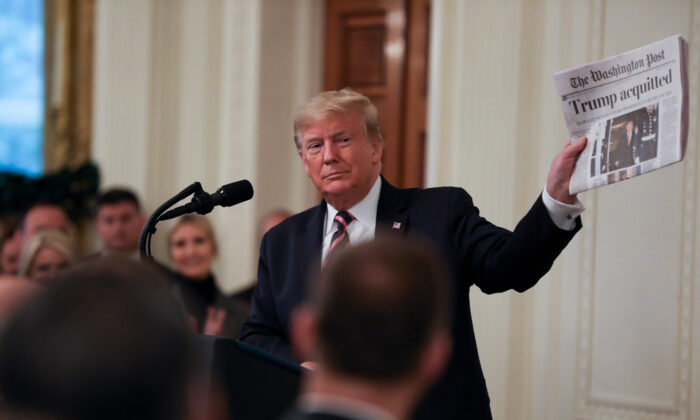 President Donald Trump holds up a newspaper during his victory speech a day after being acquitted on two articles of impeachment, in the East Room of the White House on Feb. 6, 2020. (Charlotte Cuthbertson/The Epoch Times)
Trump Presidency

President Donald Trump vowed to protect religious liberty, at the 68th national prayer breakfast in Washington, using his first public remarks since the Senate acquitted him a day earlier to also speak out against the impeachment trial.

As he walked onto the stage, Trump held up two different newspapers that bore the word “acquitted” on the front.

Sitting just a table away was House Speaker Nancy Pelosi (D-Calif.), who also gave remarks. The night before, as the president wrapped up his State of the Union address, Pelosi had pointedly torn up a copy of the speech, telling reporters later the document “was a manifesto of untruths.”

“We come together as one nation, blessed to live in freedom, and grateful to worship in peace,” Trump said at the annual breakfast held in Washington.

The president then spoke about the impeachment inquiry and trial, which have dominated American politics and media headlines since September.

“My family, our great country, and your president have been put through a terrible ordeal by some very dishonest and corrupt people,” Trump said. “They have done everything possible to destroy us, and by so doing, very badly hurt our nation. They know what they are doing is wrong, but they put themselves far ahead of our great country.”

Trump said Republicans had the “fortitude and strength to do what everyone knows was right.”

He also made an apparent dig at Pelosi, who said in September that she was praying for the president “all the time” in an interview days after announcing that the House was starting its impeachment inquiry.

Trump dedicated many of his remarks to reiterating that he, his administration, and America will always protect the right to faith.

“In everything we do, we are creating a culture that protects freedom, and that includes religious freedom,” he said.

Toward the end of his remarks, the president received a standing ovation when he spoke about construction on the Mount Pleasant church—one of three African American churches that were set on fire in Louisiana by arsonists.

He said: “In the wake of such shocking evil, America witnessed the unshakable unity, devotion, and spirit of Reverend Toussaint and his entire highly spirited, beautiful congregation. Families quickly came together in prayer. Soon, people from all across Louisiana came to help any way they could. Americans in all 50 states and 20 different countries heard about it and they donated more than $2 million to help rebuild Mount Pleasant.”

House Minority Leader Kevin McCarthy (D-Calif.), Pelosi, and others seated at the long tables surrounding the podium also stood up and clapped during that moment.

Pelosi, who spoke before the president, asked for prayers for religious minorities who were persecuted for their faith.

“Let us pray that we never become immune to the atrocities that continue to challenge the collective conscience of our shared humanity,” she said.

On Feb. 5, senators voted along party lines to acquit the president of the two charges against him: abuse of power and obstruction of Congress. Only Sen. Mitt Romney (R-Utah) voted with Democrats to convict on abuse of power.

After the breakfast event, Pelosi took the opportunity to provide a detailed rationale for why she tore up a copy of Trump’s prepared State of the Union remarks in her weekly press conference.

She told reporters that the president had lied to the American people. “It was, in my view, a manifesto of mistruths, of falsehoods, blatantly, really dangerous to the well-being of the American people if they believed in what he said,” she said. “So again, we do not want the chamber of the House of Representatives to be used as a backdrop of his reality shows with unreality in his presentation.”

Following the prayer breakfast, Trump spoke at the White House about the failed impeachment effort against him.

“We did nothing wrong,” he said. “It started from the day we came down the elevator … and it never really stopped. We’ve been going through this now for over three years.”