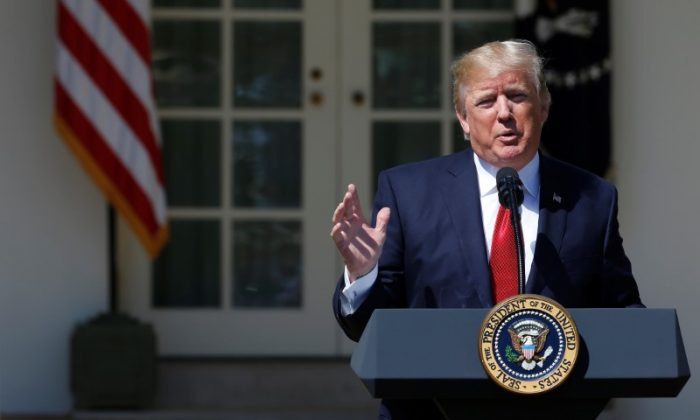 President Donald Trump speaks before the swearing in of Judge Neil Gorsuch as an Associate Supreme Court Justice in the Rose Garden of the White House in Washington on April 10, 2017. (REUTERS/Joshua Roberts)
International

Trump Plans to Move Ahead With Nigeria Planes Sale

WASHINGTON/ABUJA—President Donald Trump’s administration is pushing forward with plans to sell up to a dozen aircraft to Nigeria’s air force for the fight against the extremist Islamic group Boko Haram, sources said on Monday, in a deal that could be worth up to $600 million.

The Super Tucano A-29 aircraft, an agile, propeller-driven plane with reconnaissance and surveillance as well as attack capabilities, is made by Brazil’s Embraer. A second production line is in Florida, in a partnership between Embraer and privately held Sierra Nevada Corp of Sparks, Nevada.

Former President Barack Obama’s administration originally agreed on the sale, but delayed it after incidents including the Nigerian Air Force’s bombing of a refugee camp in January that killed 90 to 170 civilians.

The Trump administration wants to push ahead to boost Nigeria’s efforts to fight Boko Haram and bolster hiring in the United States by defense firms.

“We’ve been told that the administration is going to go forward with that transaction,” a congressional aide said.

Formal notification of the deal has not yet been sent to Congress but is expected shortly. Trump has said he plans to go ahead with foreign defense sales delayed under Obama by human rights concerns.

“I can confirm to you that the U.S. has agreed to sell some fighter jets to us to support in the ongoing insurgency war,” a senior Nigerian military source said in Abuja, Nigeria’s capital.

“The ongoing negotiation is not only in the supply of fighter jets but also assistance in training, surveillance and military intelligence,” the source said.

In March, the Trump administration informed Congress of its plans to pursue a $5 billion sale to Bahrain of Lockheed Martin F-16s and related equipment, which had been held up under Obama when Bahrain failed to meet human rights targets.

Reuters first reported the Obama administration’s plan to sell the Embraer aircraft to Nigeria in May 2016, as a vote of confidence in President Muhammadu Buhari’s drive to reform the military.

Trump’s plan to move ahead with the Nigerian sale was first reported on Monday by the Associated Press.

The U.S. congressional source said human rights concerns remain, despite support for the sale from some lawmakers. There are also questions about whether Nigeria’s government will be able to pay the full $600 million for the aircraft, equipment, training and support.

Senior U.S. officials said Buhari had long expressed frustration over delays in the sale and raised it in a phone call with Trump in February.