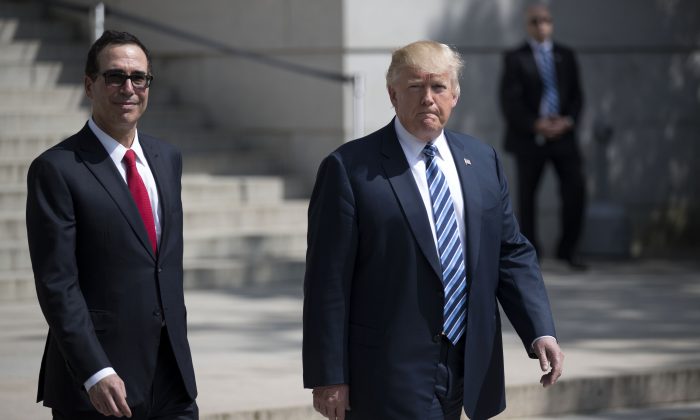 WASHINGTON—President Donald Trump promised a “big announcement” next week on overhauling the U.S. tax code, a top campaign pledge, but it won’t be a legislative proposal, but “broad principles and priorities,” an administration official said on Saturday.

The president said on Friday at a Treasury Department event that there would be “a big announcement on Wednesday having to do with tax reform.”

In a Twitter message on Saturday, he wrote: “Big TAX REFORM AND TAX REDUCTION will be announced next Wednesday.”

Asked for details, the administration official, who asked not to be identified, said, “We will outline our broad principles and priorities” on Wednesday.

Under U.S. law, only Congress can make significant tax law changes, though the president often drives the tax agenda by offering legislation. The administration official said, “We are moving forward on comprehensive tax reform that cuts tax rates for individuals, simplifies our overly complicated system and creates jobs by making American businesses competitive.”

Although Republicans control both chambers of Congress, they don’t have enough votes to overcome a filibuster of Democratic Senators. To prevail, a bill would need at least eight Democratic votes in the Senate. Republicans may also adjust the tax code purely through budgetary measures (so-called reconciliation), but even for that they can’t afford to lose more than four votes of Republican Senators, themselves not unified on tax issues.

As a candidate, Trump raised high expectations in financial markets and the business community for changes in the complex, loophole-riddled tax system. In his “Contract with the American Voter,” he vowed to work with Congress on tax legislation “within the first 100 days of my administration.” The action plan promised large tax cuts for the middle class and businesses, a reduction of tax brackets to three from seven, simplified tax forms and an offshore profits repatriation tax holiday.

Since then, no legislation or formal tax plan has been presented by Trump. In February, Trump promised a broad tax plan outline within a few weeks, but haven’t delivered.

He seems ambivalent towards a plan drawn up by House Republicans, that proposes, among broad tax cuts and other measures, giving tax breaks to exporters and stripping tax breaks from importers. That plan, however, may also struggle to garner enough support in Congress as companies that rely on imports lobby against it.