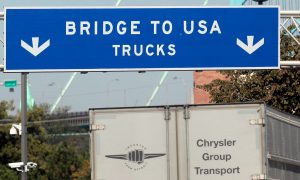 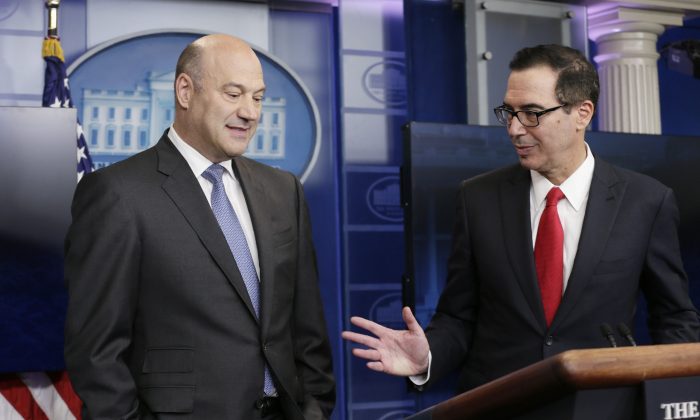 WASHINGTON—President Donald Trump’s tax plan, due to be unveiled on Wednesday and proposing to sharply cut rates for businesses and on overseas corporate profits returned to the United States, was likely to be treated by Congress as just an opening gambit.

The Trump administration touted the blueprint, which also calls for raising standard deductions for individuals, as a landmark tax cut just days before the president marks his 100th day in office on Saturday.

Trump’s proposals were expected to be unveiled at the White House at 1:30 p.m. ET on Wednesday by Treasury Secretary Steve Mnuchin and Trump economic adviser Gary Cohn.

Mnuchin, spearheading the administration’s effort to craft a package that can pass Congress, described the plan as “the biggest tax cut” in U.S. history, telling a Washington breakfast forum he hoped it would attract broad support.

“There’s multiple ways of doing this and the president is determined that we will have tax reform,” he said. “It was very important to the president that we put out the core principles. This is part of his big impact for the first 100 days.”

Republican House Speaker Paul Ryan, a longtime champion of a major tax restructuring, expressed optimism about the plan, even though it is not expected to include a “border adjustment” tax on imports that he has pushed. The controversial idea was part of earlier initiatives floated by House Republicans as a way to offset revenue losses resulting from steep tax cuts.

“We’ve seen a sneak preview. We like it a lot,” Ryan told a gathering of lobbyists and lawyers. “It puts us on the same page. We’re in agreement on 80 percent and on the (remaining) 20 percent we’re in the same ballpark.”

Republican lawmakers generally greeted Trump’s plan as a single viewpoint that will start negotiations in Congress and will ultimately be modified if it becomes law.

“I welcome the White House’s initiative on this, it’s a good thing,” Republican Representative Peter Roskam, a member of the tax-writing Ways and Means Committee, told lobbyists.

“If the president’s plan is to give a massive tax break to the very wealthy in this country—a plan that will mostly benefit people and businesses like President Trump’s—that won’t pass muster with we Democrats,” he said in a statement.

U.S. stocks hovered near record levels on Wednesday ahead of the unveiling of the plan, a reflection of Wall Street’s optimism about corporate tax cuts since Trump’s election in November.

Some analysts said investors were aware of the long road ahead before any tax bill is passed.

“We have a pretty good idea that he (Trump) is targeting lower corporate taxes, lower individual taxes and a simplification of the process, but all that is in an ideal world,” said Andre Bakhos, managing director at Janlyn Capital in Bernardsville, New Jersey. “The market will not interpret the plan negatively, but there are obstacles in that course, just like with anything that Trump says and does.”

While public corporations’ profits or losses are taxed directly, “pass-through” businesses are taxed under the individual income tax code.

Schumer called the 15 percent proposal “a tax giveaway to the very, very wealthy that will explode the deficit,” although Mnuchin said rich individuals would not be able to use the lower business rate as a loophole.

Trump will also propose, according to a White House official, that corporations bring offshore profits into the country at a 10 percent tax rate, well below the current 35 percent rate. Trump made this proposal in his campaign.

About $2.6 trillion in profits are being held tax-exempt abroad by U.S. multinationals under a rule that says they are only taxable if brought into the United States, or repatriated. Trump proposes requiring repatriation, but at the lower rate.

If enacted, the measure would produce a one-time surge in revenue that could be dedicated to infrastructure spending, an idea that could attract votes from Democrats.

Trump will also call for an increase in the standard deduction people can claim on their tax returns, an administration official confirmed on Wednesday.

Democrats and fiscal-hawk Republicans will be concerned about how much Trump’s proposals would cause the deficit to balloon. To minimize that impact, Republicans will rely heavily on “dynamic scoring.” This is a controversial economic modeling method that attempts to predict economic growth and new tax revenues resulting from tax cuts.

If a bill is deemed to increase the national deficit beyond a 10-year window that is covered by the budget, then it would need 60 senators to support the changes. Because there are only 52 Republicans in the Senate, Trump would need to win over at least eight Democrats to meet the higher bar.

But Republicans have suggested they could skirt the 60-vote requirement by using expiration dates and dynamic scoring – a process that projects deficits while also arguing that tax cuts will grow the economy.

The last thorough overhaul of the U.S. tax code, a much more comprehensive package than a collection of tax cuts, was accomplished in 1986 during the administration of former President Ronald Reagan, a Republican.