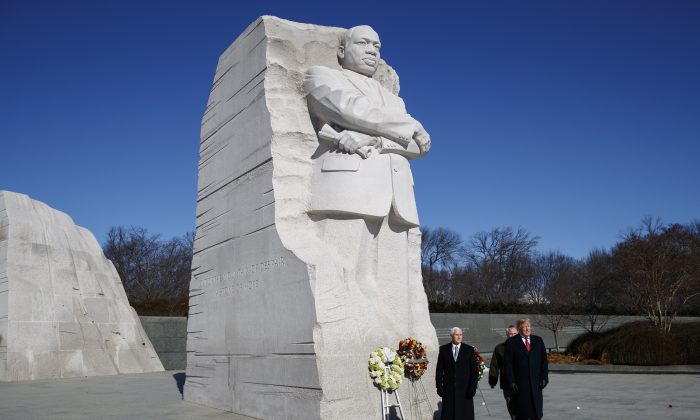 President Donald Trump and Vice President Mike Pence made a surprise visit to the Martin Luther King Jr.. Memorial in Washington on Jan. 21.

The visit came during the federal holiday in honor of King, the famed civil rights activist.

Trump told reporters good morning before a moment of silence while he and Pence laid a wreath at the memorial.

Surprise @POTUS and @VP visit to the MLK memorial in Washington, DC pic.twitter.com/VvQEZOn0Yt

.⁦@realDonaldTrump⁩ and ⁦@VP⁩ lay a wreath at the #MLKJr memorial. After saying good morning, he left. Total trip time: about a minute or two. pic.twitter.com/KZgctfrX5B

After laying the wreath, Trump added: “Good morning, everybody. Great day. Beautiful day. Thank you for being here. Appreciate it.”

He and Pence then left the memorial and returned to the White House.

Neither Trump nor Pence had any events on their public schedules, making the visit a surprise.

On Jan. 18, the president released a proclamation honoring King, remembering his famous 1963 speech on the steps of the Lincoln Memorial.

“His extraordinary message that momentous day in August of 1963 stirred to action Americans of every race and creed, and it continues to reverberate in the hearts and minds of patriotic citizens across our great land,” Trump said. “Today, as we pause to mark the life and legacy of Dr. Martin Luther King Jr., we recommit ourselves to the advancement of equality and justice for all Americans, and to the full realization of his worthy dream.”

“More than half a century after Dr. King’s March on Washington for Jobs and Freedom, our Nation is mindful of its past, and we look forward to the future with unwavering optimism, inspired by the legacy of Dr. King and informed by his wisdom and vision,” Trump added.

“May the memory of Dr. Martin Luther King Jr., and the efforts we have made to fully effectuate his dream, remind us that faith and love unite us together as one great American family.”

The memorial to King is located in downtown Washington, which is also home to a number of other memorials to famous Americans, including Abraham Lincoln and Thomas Jefferson. It is open 24 hours a day and is completely outdoors and free to visit.

The memorial, which was dedicated in 2011, was designed by ROMA Design Group and sculpted by Chinese artist Lei Yixin, who won the design competition.

“Dr. Martin Luther King Jr. was a Baptist minister and social activist who became a notable figure during the U.S. civil rights movement from the mid-1950s until he was assassinated in 1968. He played a pivotal role in ending the legal segregation of African American citizens in the U.S., influencing the creation of the Civil Rights Act of 1964 and the Voting Rights Act of 1965. He received the Nobel Peace Prize in 1964, among other honors,” according to the National Park Service website.

King “is the first African American honored with a memorial on the National Mall and the fourth non-president to be remembered in such a way. Martin Luther King Jr.’s message is universal: a non-violent philosophy striving for freedom, justice, and equality.”

A number of King’s quotations are engraved around the memorial, including, “Out of the mountain of despair, a stone of hope,” which served as the theme of the overall design.

Also included is a line from a Christmas sermon that King gave in Atlanta in 1967: “If we are to have peace on earth, our loyalties must become ecumenical rather than sectional. Our loyalties must transcend our race, our tribe, our class, and our nation; and this means we must develop a world perspective.”