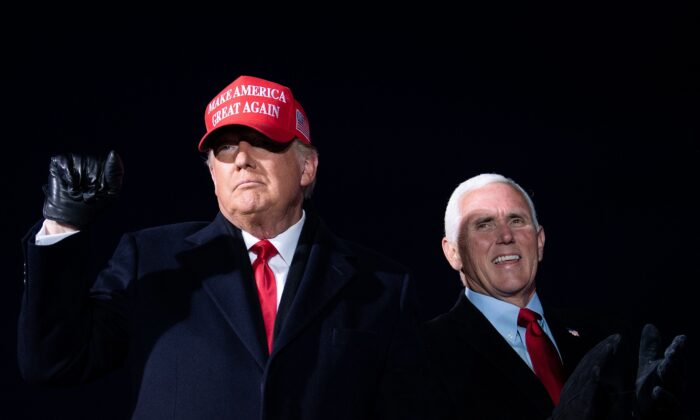 Then President Donald Trump arrives with then Vice President Mike Pence for a rally in Traverse City, Mich., on Nov. 2, 2020. (Brendan Smialowski/AFP via Getty Images)
Republicans

Trump has thrown the weight of his endorsement behind former TV anchor Kari Lake and stumped on her behalf at a Friday rally in Prescott Valley, calling her a “smart, tough, and very good person.”

“No one understands better than Kari how to fight back against the fake news media and the radical left,” Trump said at the event.

Trump also took the opportunity to once again tease a run for the presidency in 2024, expressing confidence that his Make America Great Again (MAGA) movement will retake the White House.

“I’m a Christian, a conservative, and a Republican in that order,” Pence said from the stage in Peoria. “And I’m here because Arizona and America need Karrin Taylor Robson as the next governor of Arizona.”

“Karrin knows what Arizona needs in the days ahead. She knows there’s no greater threat to Arizona and to this country than the crisis on our southern border,” Pence added.

Pence, Ducey, and Robson also discussed border security during a second event in Tucson at the headquarters for the Border Patrol union.

“Securing the border takes two things: resources and will power,” Robson said at the event. “President Trump and Vice President Pence already showed that it can be done.”

Stemming the flow of illegal immigration and securing the southern border was a staple of the Trump-Pence ticket.

Pence has repeatedly spoken highly of his time in the Trump administration, especially in the area of immigration policy.

“The truth of the matter is under the Trump-Pence administration, our neighbors to the south knew we expected them to do their part to secure their border and ours,” Pence said at an event in Phoenix in mid-June.

“They showed respect to America during the Trump-Pence years,” the former Vice President said at the time.

Robson, a lawyer and housing developer, is looking to lock up support from Republicans growing increasingly comfortable with breaking from Trump.

Lake has energized Trump’s most ardent supporters in Arizona, backing the former president’s claims that the 2020 election was stolen.

“As your governor I want to bring those America First Trump policies here to Arizona,” Lake said at the rally in Peoria. “We’re going to secure that border. We are going to restore honesty and faith in our elections.”

Trump touched on the election fraud theme in his remarks at the rally.

“We need a landslide so big that the radical left cannot rig or steal even if they try,” Trump said.

The Arizona Primary Election is scheduled for Aug. 2.