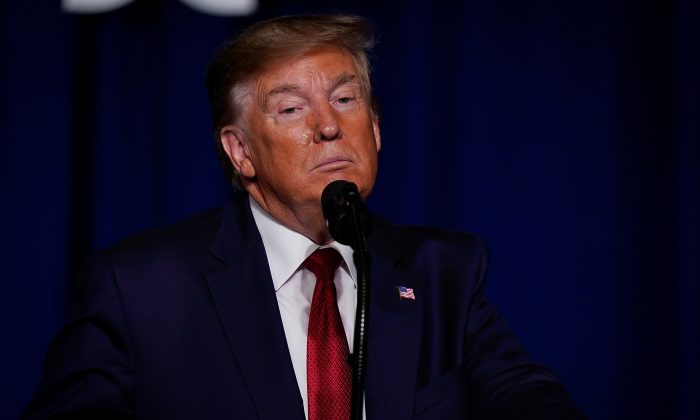 WASHINGTON/BEIJING—President Donald Trump on Aug. 23 said he has ordered American companies to exit China after Beijing unveiled retaliatory tariffs on $75 billion of U.S. goods, throwing a new twist into the bitter trade war between the world’s two largest economies.

The president was meeting with his trade team at midday, a senior White House official told Reuters.

“We don’t need China and, frankly, would be far better off without them. The vast amounts of money made and stolen by China from the United States, year after year, for decades, will and must STOP,” Trump tweeted.

“Our great American companies are hereby ordered to immediately start looking for an alternative to China, including bringing your companies HOME and making your products in the USA.”

It’s unclear what legal authority Trump would be able to use to compel U.S. companies to close operations in China or stop sourcing products from the country.

Trump said he also was ordering shippers including FedEx, Amazon, UPS and the U.S. Postal Services to search out and refuse all deliveries of the opioid fentanyl to the United States.

China on Friday said it would impose retaliatory tariffs on $75 billion of U.S. goods, targeting crude oil for the first time and renewing punitive duties on American-made autos.

The latest salvo was in response to Trump’s plans to impose 10 percent tariffs on a final $300 billion list of Chinese-made consumer goods on Sept. 1 and Dec. 15, including cell phones, toys, laptop computers and clothing.

China’s Commerce Ministry said that on those same dates it will impose additional tariffs of 5 percent or 10 percent on a total of 5,078 products originating from the United States, including small aircraft.

“It is unclear as things stand whether the U.S.-China trade negotiations will continue as planned in early September,” said Agathe Demarais, global forecasting director at the Economist Intelligence Unit, in an e-mail statement.

“All eyes will now turn to the U.S. Fed to see whether Jerome Powell, the Fed Chairman, will react to these developments by accelerating rate cuts.”

In a keynote speech at the Fed’s annual central banking conference in Jackson Hole, Wyoming, on Friday, Powell said the U.S. central bank would “act as appropriate” to keep the economy healthy but did not say how fast it might cut rates.