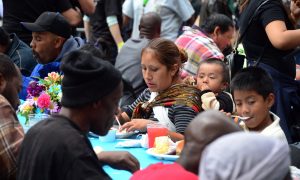 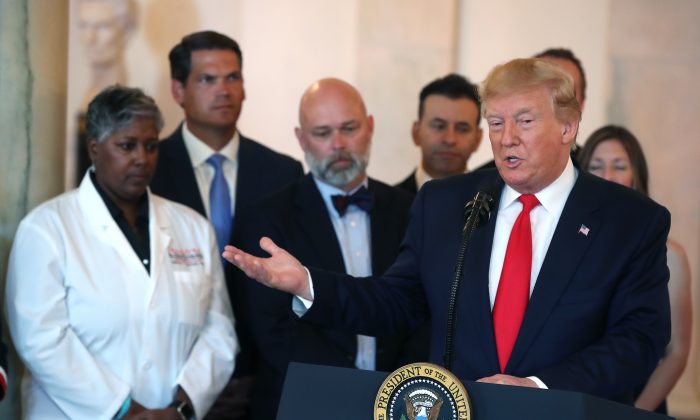 President Donald Trump speaks before signing an executive order intended to improve quality and price transparency in health care during an event in the Grand Foyer of the White House on June 24, 2019. (Mark Wilson/Getty Images)
Trump Administration

President Donald Trump signed an executive order on June 24 that calls for hospitals to publicly disclose the actual cost of services in an effort to improve price and quality transparency in America’s health care system.

According to the White House, at Trump’s direction, the Department of Health and Human Services (HHS) will require hospitals to disclose service costs in an “easy-to-read format” and make such information more accessible to patients before they receive their care.

The president spoke for about 22 minutes in the Grand Foyer of the White House as he described the executive order as a “truly big action” that would “fundamentally” change the health care marketplace and keep costs down.

“This landmark initiative continues our campaign to put American patients first,” he said. “We will empower patients with the information they need to search for the lowest costs and the highest quality care.”

Trump said the “lack of price transparency has enriched industry giants greatly,” asking why the issue was not addressed already.

“This is bigger than anything we’ve done in this particular realm,” he said.

The goal behind the order is to give patients practical information they can use to save money. For example, if a hospital charges an insurer $3,500 for a type of echocardiogram and the same test costs $550 in a doctor’s office, a patient might go for the lower-price procedure to save on copays.

The executive order calls for a rule-making process by federal agencies, which won’t happen straight away. The details of what information will have to be disclosed and how it will be made available to patients must be worked out as part of writing the regulations. It will involve a complex give-and-take with hospitals, insurers, and other affected parties.

The order is titled “Improving Price and Quality Transparency in American Healthcare to Put Patients First.”

Trump called the order “the opposite of Obamacare” and invoked former President Barack Obama’s line about “keeping your doctor,” describing it as a “lie.” He also blamed Democrat lawmakers for supporting democratic socialist Sen. Bernie Sanders (I-Vt.) and his push for a “socialist takeover of health care.”

Before Trump signed the document, Health and Human Services Secretary Alex Azar told reporters during a press call that the order “will put American patients in control and address the fundamental drivers of high American health care costs … by increasing choice and competition.”

A senior administration official told reporters that the order “does not specify the precise level of detail or individual versus aggregated information,” adding that it would be a part of the rule-making process.

Lack of information about health care prices is a widespread problem. It’s confusing for patients, and experts say it’s also one of the major factors that push up medical costs in the United States.

While the prices Medicare pays are publicly available, private insurers’ negotiated rates generally are not. Industry officials say that such contractual information is tantamount to trade secrets and should remain private.

Azar pushed back against that argument, saying insurers do ultimately disclose their payment rates when they send individual patients an “explanation of benefits,” a document patients receive after they’ve had a procedure or seen the doctor.

“Every time one of us goes to a hospital, within a couple of weeks, there arrives an explanation of benefits that contains the list price, the negotiated price, and your out-of-pocket cost,” Azar explained.

“This is not some great state secret out there,” he said. “That information is out there, it just needs to be presented to patients at the right time, in the right format, so it can help drive decision-making for them.”

The executive order also expands the benefit of Health Savings Accounts (HSAs) and other tax-preferred health accounts, according to the White House.

Trump also signed legislation that would end “gag” clauses that had blocked pharmacists from informing patients about possible lower prices for drugs.

The order follows the administration making a requirement for drug manufacturers to disclose their drug prices in their television advertisements.