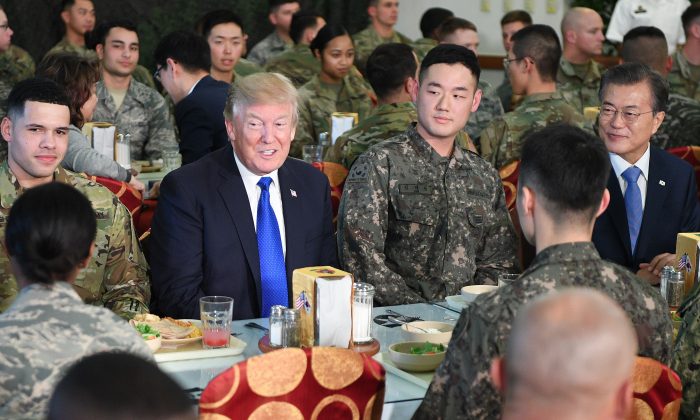 Trump Opts to Have Lunch with Troops in South Korea

The president praised the troops for doing a “terrific job.”

Troops who were present at the lunch said Trump told them there was no place he’d rather be, Stars and Stripes reported.

On the menu was Mexican food. According to Stars and Stripes, Trump had tacos, a burrito, and curly fries.

Sgt. 1st Class Michael Banegura, who manages the dining facility at Camp Humphreys, told the publication that the president was offered more options, but that he had insisted to eat the same thing as the troops.

One of the 108 handpicked service members present at the lunch, Marine Sgt. Cortney Wells, 25, said she was humbled to have been chosen to sit near Trump.

“With everything going on I know people at home are concerned. I think it’s great, especially for the alliance, that both presidents are going to be here together,” she told Stars and Stripes.

Located 40 miles south of Seoul, Camp Humphreys is the United States’ largest overseas base. Over 90 percent of the nearly $11 billion cost of the base is being paid by South Korea under the Special Measures Agreement signed in 2013.

Trump is currently on a 12-day tour of Asia where he will visit five countries. Solving the North Korean nuclear threat is the top priority for Trump’s visit.

In a joint press conference with the South Korean President on Tuesday, Trump said their military “is becoming very strong,” adding that South Korea is “buying a lot” of military equipment made in the United States.

The United States has an estimated 37,000 troops currently stationed in South Korea—the highest number in over a decade.

North Korea has repeatedly threatened to attack the U.S. mainland along with U.S. allies South Korea and Japan with nuclear weapons.

In response, Trump has sought to find a diplomatic solution for the denuclearization of North Korea while at the same time using economic sanctions and a strong military threat to force the North to the negotiating table.

“I would also like to commend you on your efforts in leading the international collaboration and unity when it comes to countering North Korea nuclear issue,” Moon told Trump during the joint press conference.

“I hope that your visit to Korea and to the Asia Pacific region will serve as an opportunity to relieve some of the anxiety that the Korean people have due to North Korea’s provocations,” he said.