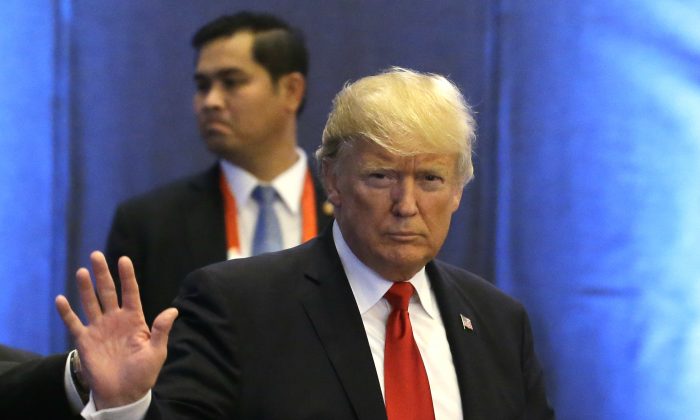 US Donald Trump waves as he arrives during the ASEAN-US 40th Anniversary Commemorative Summit on the sideline of the 31st Association of Southeast Asian Nations (ASEAN) Summit in Manila on Nov. 13, 2017. World leaders are in the Philippines' capital for two days of summits. (AARON FAVILA/AFP/Getty Images)
Asia & Pacific

President Donald Trump has opened the door to a peaceful resolution to the North Korean nuclear crisis.

“I also have come here to this peninsula to deliver a message directly to the leader of the North Korean dictatorship: The weapons you are acquiring are not making you safer. They are putting your regime in grave danger. Every step you take down this dark path increases the peril you face,” Trump said.

However, despite North Korea’s relentless pursuit of nuclear weapons, and its frequent threats to use such weapons against the United States and key allies, Trump said there is a way forward.

“Despite every crime you have committed against God and man, we’re ready to offer, and we will do that—we will offer a path to a much better future,” Trump said.

That better future might be found in the praise Trump gave of South Korea in his speech.

“Family by family, city by city, the people of South Korea built this country into what is today, one of the great nations of the world. And I congratulate you. In less than one lifetime, South Korea climbed from total devastation to among the wealthiest nations on Earth,” he said.

“Today, your economy is more than 350 times larger than what it was in 1960. Trade has increased 1,900 times. Life expectancy has risen from just 53 years to more than 82 years today.”

Trump’s statement in South Korea is consistent with his push for a diplomatic solution to the crisis. Last month, Secretary of State Rex Tillerson told CNN said that Trump had instructed him to find a diplomatic solution, while military contingency plans were being prepared to pressure Kim Jong Un to the negotiating table.

With those military plans fully in place now, including the deployment of three aircraft carriers to the Western Pacific, Trump, a firm believer in the doctrine of peace through strength, is adding personal pressure to get Kim to the negotiating table.

A Nov. 12 Tweet by Trump might point to Trump’s change in strategy. While responding to North Korean state media, which had described him as “a lunatic old man,” Trump said about Kim that he would “NEVER call him ‘short and fat?'” and wrote that he’s actually trying hard “to be his friend.”

While the Tweet can be interpreted many different ways, including as a simple strike back against the North Korean insult combined with sarcasm on trying to be friends, it might actually point to a switch in Trump’s strategy.

Despite the threat of military force, North Korea has not engaged in talks on its nuclear program. Extending the offer of a better future for North Korea, and personal engagement, offers another way to encourage talks.

Why would Kim Jong-un insult me by calling me "old," when I would NEVER call him "short and fat?" Oh well, I try so hard to be his friend – and maybe someday that will happen!

Trump’s building of relationships with other leaders has so far served him well. He has cultivated a close relationship with Chinese leader Xi Jinping, resulting in China going far beyond mandated U.N. Security Council sanctions in countering North Korea.

Japan, South Korea, China, Vietnam, the Philippines, and Australia are among the nations who have pledged to help the United States to solve the North Korean nuclear crisis.

“The North Korean situation continues to be a problem,” Trump said on Nov. 12 while in the Philippines.

While Trump has cultivated a close relationship with Chinese leader Xi Jinping, as well as Japan’s Shinzo Abe, and has worked to improve relations with South Korea’s Moon Jae-in, he has not been able to work on his relationship with Russia’s Putin.

Trump said that the fake narrative that he colluded with Russia in winning the elections, was making it difficult to improve relations with Russia.

“I call it the ‘artificial Democrat barrier.’ It gets in the way, which is a shame,” Trump said.

“You’re talking about millions and millions of lives. This isn’t baby stuff. This is the real deal. And if Russia helped us, in addition to China, that problem would go away a lot faster.”