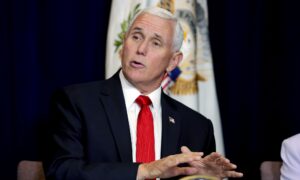 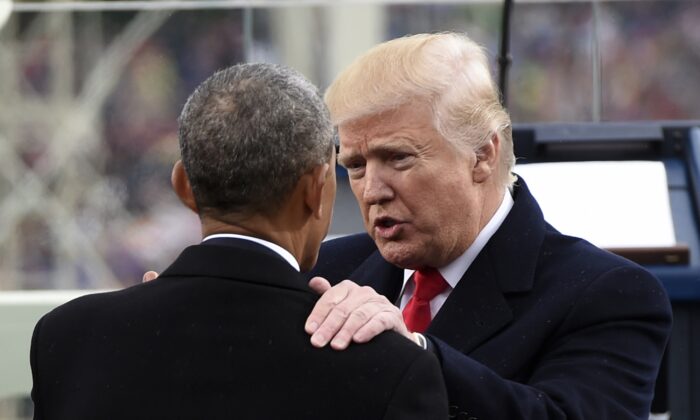 Trump: ‘Obamagate’ Was ‘the Biggest Political Crime in American History’

President Donald Trump claimed on May 10 that “Obamagate” was “the biggest political crime in American history, by far!”

Trump took to Twitter, his favored social media platform, to make the statement.

He added on May 11: “OBAMAGATE makes Watergate look small time!”

The Office of Barack and Michelle Obama didn’t respond to a request by The Epoch Times for comment on Trump’s remarks.

The term Trump used first started to trend in March 2017 after the newly elected president claimed on Twitter that former President Obama had had Trump’s “wires tapped.”

According to recently released documents, Obama was aware of details from wiretapped phone calls between Trump’s then-national security adviser Lt. Gen. (ret.) Michael Flynn and Russia’s ambassador to the United States in late 2016 or early 2017. Flynn was later accused of lying to the FBI about details of the calls during a Jan. 24, 2017, interview. Flynn resigned from his position shortly after.

High-level officials differ on who informed Obama, with several claiming it was James Clapper, the director of national intelligence. Clapper denied the allegations under oath.

Trump spent portions of May 10 sharing tweets from a wide range of accounts, buttressing the retweets with the two brief statements.

One tweet shared by the president showed a meme of Trump looking at the camera with the words emblazoned on the photo: “Hope you had fun investigating me. Now it’s my turn.”

Another post said: “Unless people are indited [sic] and put in prison the corruption will continue.”

Another account retweeted by Trump alleged treason, wondering who would be the first person besides Trump “to call for Treason Charges” and “demand Prosecution of the Frame Up Conspirators in this Attempted Overthrow of our Presidency?”

Trump also shared a number of posts from Andrew McCarthy, a former federal prosecutor who argued that Obama administration officials collaborated with the FBI on the investigation of Flynn.

The Department of Justice dropped the case against Flynn last week after a review found the Jan. 24, 2017, interview of Trump’s first national security adviser “was untethered to, and unjustified by, the FBI’s counterintelligence investigation into Mr. Flynn.”

That investigation was “a no longer justifiably predicated investigation,” stated Timothy Shea, interim U.S. attorney for the District of Columbia, referring to the FBI’s move to close the probe until special agent Peter Strzok intervened to keep it open.

Strzok was later fired after a slew of anti-Trump messages to FBI lawyer Lisa Page, who worked for FBI official Andrew McCabe, came to light.

Attorney General William Barr said the move to dismiss the case against Flynn “upheld the rule of law,” an assertion that Obama has disagreed with.

Obama told former administration officials that he was concerned the motion to dismiss meant that “our basic understanding of rule of law is at risk.”

“And when you start moving in those directions, it can accelerate pretty quickly, as we’ve seen in other places,” he said.