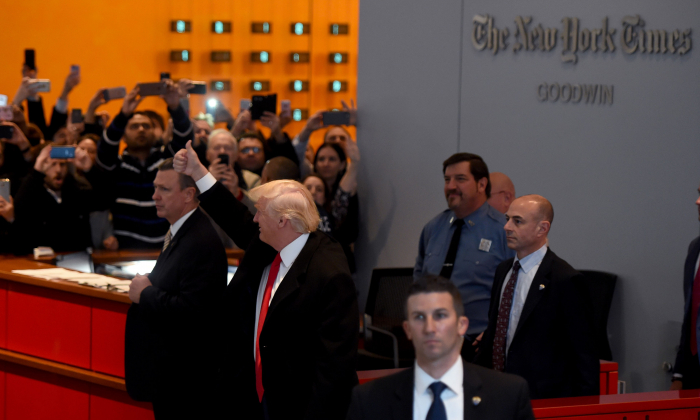 President Donald Trump revealed on July 29 that he met with New York Times Publisher A.G. Sulzberger earlier this month to discuss “the vast amounts of fake news being put out by the media.”

“Had a very good and interesting meeting at the White House with A.G. Sulzberger, Publisher of the New York Times,” Trump wrote on Twitter on July 29. “Spent much time talking about the vast amounts of Fake News being put out by the media & how that Fake News has morphed into phrase, ‘Enemy of the People.’ Sad!”

According to a statement from Sulzberger, the White House invited him to meet with Trump. He said such off-the-record meetings are not unusual and that previous presidents with concerns about media coverage have done the same. The publisher met with the president on July 20 and the meeting remained off the record until July 29.

Sulzberger said that he accepted the meeting to express his concern with the president’s “deeply troubling anti-press rhetoric.”

“I told the president that his language was not just divisive but increasingly dangerous,” Sulzberger said.

“I told him that though the phrase ‘fake news’ is untrue and harmful, I am far more concerned about him labeling journalists the ‘enemy of the people.’ I warned that this inflammatory language is contributing to a rise in threats against journalists and will lead to violence.”

The New York Times endorsed Hillary Clinton for president in 2016 and, on Election Day, predicted the likelihood of Clinton winning was 85 percent.

The New York Times is frequently mentioned when Trump lists “fake news” media, along with The Washington Post, CNN, and others.

In the first four months of 2018, coverage of Trump by ABC, CBS, and NBC was 90 percent negative, according to a report by the Media Research Center. There has been little change in the tone of media outlets’ coverage, despite progress made on trade deals, a record-low unemployment rate, a booming economy, and Trump’s historic steps toward denuclearizing North Korea.

While Sulzberger has claimed that Trump’s rhetoric will “lead to violence” against journalists, no recent incidents of that nature occurring in the United States have been widely reported.