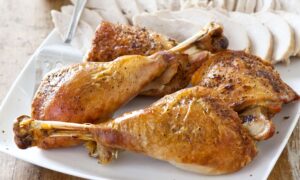 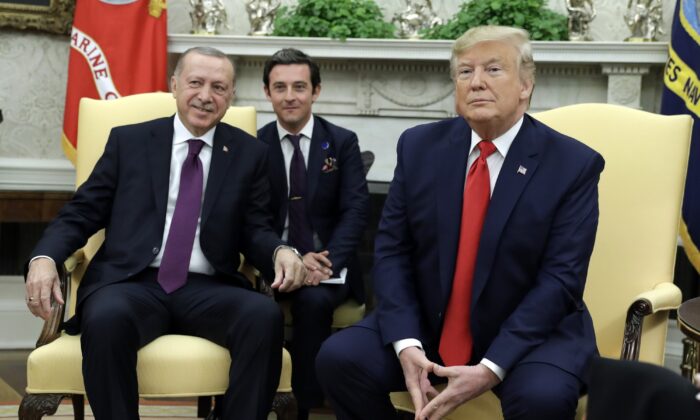 President Donald Trump met his Turkish counterpart, Recep Tayyip Erdoğan, in the White House on Wednesday, Nov. 13. Trump went into the talks focused on trade, fighting ISIS, and on untangling some contentious issues in the relationship with the NATO ally.

During an afternoon press conference, Trump praised Turkey’s participation in the United States’ fight against terrorism, including some assistance Turkey provided to the operation to kill ISIS terrorist leader Abu Bakr al-Baghdadi.

Erdoğan emphasized Turkey’s role in fighting ISIS and bearing the brunt of the Syrian civil war.

Turkey has captured thousands of ISIS terrorists, including over 1,200 still incarcerated in Turkey. It also hosts over 3.6 million Syrian refugees at the cost, so far, of some $40 billion, he said.

Erdoğan also voiced support for Trump’s plan to boost trade between the two countries about fourfold to $100 billion.

Regarding U.S. complaints about Turkey’s purchase of the Russian S-400 missile defense system, both presidents expressed a commitment to continue talks on the matter.

“Under suitable circumstances we could acquire Patriot missiles as well,” he said.

He gave no assurances regarding the S-400.

In response to the S-400 purchase, Washington removed Turkey from the F-35 fighter jet program, in which Ankara was a manufacturer and buyer.

Pulling Turkey back into the program hinges on resolving the S-400 issue, a senior administration official told reporters in a Nov. 12 evening background call.

Washington is also concerned about Turkey’s treatment of ethnic and religious minorities in Syria, including Christians, Yazidis, and Kurds, as well as “human rights issues, like religious freedom issues, within Turkey,” senior administration officials said during the call.

Erdoğan said minorities such as Yazidis and Christians have “no problems whatsoever” on the Turkish side of the border, but that Turkey has a plan to restore their places of worship in Northern Syria.

“We’ll see their sanctuaries getting revived and their churches will be reconstructed so that they can go back and start praying there again,’ he said. “And these are the plans that we’re making for them.”

Regarding the Kurds, Erdoğan made a distinction between Kurds as an ethnicity and some Kurdish organizations which Turkey considers terrorist.

He pointed out that his own party has 50 Kurdish parliament members and that Turkey has good relations with the Kurdish Autonomous Region of Iraq.

Turkey has for years complained about Washington’s cooperation in Syria with the military coalition led by the Kurdish People’s Protection Unit (YPG), which Turkey considers a terrorist group.

The United States has supported the YPG in fighting ISIS in Syria, but has acknowledged that the group is tied to the Kurdistan Workers’ Party (PKK), a terrorist group that has waged a decades-long insurgency in Turkey.

The Trump administration imposed sanctions on Turkey after Erdoğan launched in October a military offensive into Syria, its southern neighbor, with the stated purpose of pushing the YPG away from the border and to establish a “safe zone” for resettling about a million Syrian refugees.

The Syrian Democratic Forces (SDF) and Turkey have since accused each other of violating the ceasefire.

Trump said “the ceasefire continues to hold,” though he called the situation “complicated.”

Despite Turkey’s objections, the Trump administration continues to work with the Syrian Democratic Forces (SDF), a YPG-led coalition.

Trump withdrew most U.S. troops from Syria, but left some behind to guard the oil.

Turkey blames Abdi, who was formerly with the PKK, for 18 terrorist attacks in Turkey in which 164 soldiers and 40 civilians died, according to Hilal Kaplan, a reporter with the Turkish pro-government Daily Sabah newspaper.

She asked Trump whether he still plans to invite Abdi for a visit, saying it would be “very offensive an hurtful for the Turkish public.”

Trump said he recently had a “very good talk” with Abdi.

He invited the reporter to pose a question to Erdoğan too, quipping, “You’re sure you’re a reporter? You don’t work for Turkey?”