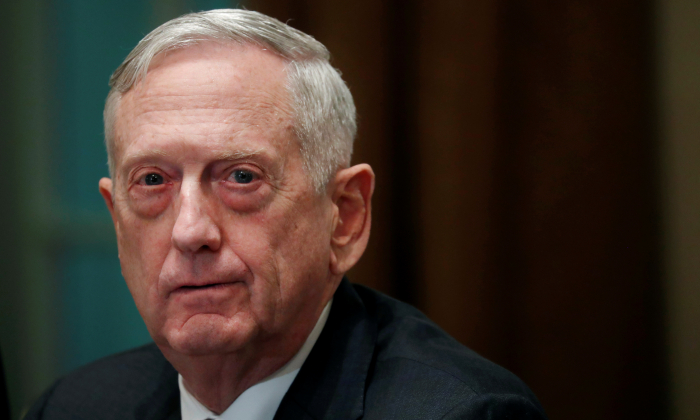 US Defense Secretary James Mattis listens as President Donald Trump speaks to the news media at a briefing from his senior military leaders in the Cabinet Room at The White House in Washington, on Oct. 23, 2018. (Leah Millis/Reuters)
Trump Administration

U.S. President Donald Trump announced on Dec. 23 that Defense Secretary Gen. JimMattis will be leaving the administration on Jan. 1, about two months earlier than the previously planned departure date.

It’s unclear why the date was moved ahead, as Trump named the acting replacement.

“I am pleased to announce that our very talented Deputy Secretary of Defense, Patrick Shanahan, will assume the title of Acting Secretary of Defense starting Jan. 1, 2019,” he wrote on Dec. 23. “Patrick has a long list of accomplishments while serving as the deputy, and previously Boeing. He will be great!”

The announcement comes just days after Mattis, a retired four-star general, wrote his resignation letter that highlighted policy differences he had with the president. The letter came on the heels of Trump’s decision to withdraw U.S. troops from Syria, a move Trump said was necessary after declaring victory against the ISIS terrorist group. Trump said troops were no longer needed in the country.

At the time of his resignation, Mattis was slated to leave his post in February 2019.

“Because you have the right to have a secretary of defense whose views are better aligned with yours on these and other subjects, I believe it is right for me to step down from my position,” Mattis said in his Dec. 20 resignation letter to the president. “While the U.S. remains the indispensable nation in the free world, we cannot protect our interests or serve that role effectively without maintaining strong alliances and showing respect to those allies,” Mattis added.

About 2,000 U.S. troops will be pulled out of Syria within 30 days. On Twitter, Trump responded to some criticism the move was too sudden and could create a possible power vacuum that could be potentially be exploited by Russia and Iran.

The president’s withdrawal of troops, one of his 2016 campaign promises, comes after he argued that the United States shouldn’t police the Middle East because there is no benefit to the nation.

“Does the USA want to be the policeman of the Middle East, getting nothing but spending precious lives and trillions of dollars, protecting others who, in almost all cases, do not appreciate what we are doing? Do we want to be there forever? Time for others to finally fight,” Trump said in a Twitter post on Dec. 2o.

Trump separately criticized the “fake news” media for their coverage of the withdrawal.

“If anybody but your favorite President, Donald J. Trump, announced that after decimating ISIS in Syria we were going to bring our troops back home (happy and healthy) that person would be the most popular hero in America,” Trump said on Twitter on Dec. 22. “With me, hit hard instead by the fake news media. Crazy!”

Defense Department spokeswoman Dana White said Mattis will work with Shanahan and Pentagon leadership to ensure the department “remains focused on the defense of the nation during this transition.”

Shanahan, in his job as deputy defense secretary, has largely focused on internal Pentagon reform and issues such as the creation of a Space Force, a project championed by Trump but resisted by some lawmakers and others in the Pentagon.

A senior administration official told Reuters that Shanahan has a “deep-seated understanding of military operations, and global security affairs and, importantly, has the breadth of large-scale business management experience that will enable him to effectively oversee the Defense Department.”