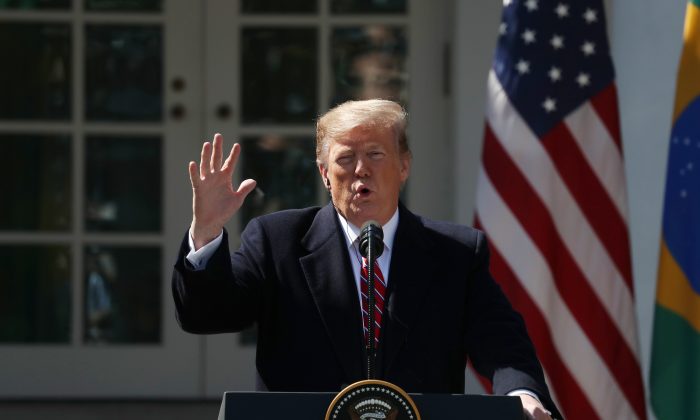 President Donald Trump said on March 19 that he plans to investigate Facebook’s apparent decision to censor one of his top aides’ own social-media account on the platform.

“I will be looking into this! #StopTheBias,” the president wrote on Twitter.

The full message of the ban from Facebook claimed: “Some of your comments have been reported as spam. To avoid getting blocked again, make sure your posts are in line with the Facebook community standards.”

Scavino, also the assistant to the president, responded to the notification by posting a screenshot of the block on March 18 with an accompanying caption.

In the caption, he wrote: “Dear Facebook—AMAZING. WHY ARE YOU STOPPING ME from replying to comments followers have left me – on my own Facebook Page!!?? People have the right to know. Why are you silencing me??? Please LMK! Thanks.”

The message from Facebook didn’t specify which individual comments Scavino made that had apparently violated the community standards.

Facebook didn’t respond to a request from The Epoch Times for comment on the incident, but a spokesperson told Reuters that the issue was an “unintended consequence” of the platform’s policy on spam, adding that Facebook has been in touch with Scavino and apologized to him.

Explaining the error, Facebook said it caps the amount of identical, repetitive activity coming from one account in a short period of time as a way to stop automated bots.

“These limits can have the unintended consequence of temporarily preventing real people like Dan Scavino from engaging in such activity, but lift in an hour or two, which is what happened in this case,” a Facebook spokesperson said.

Earlier in the day, Trump railed against major social-media companies and accused them of favoring Democrats.

“Facebook, Google and Twitter, not to mention the Corrupt Media, are sooo on the side of the Radical Left Democrats,” he said on Twitter. “But fear not, we will win anyway, just like we did before! #MAGA”

The ban also caught the attention of Donald Trump Jr., who questioned the power that social-media companies have.

As I’ve been saying. This is a disgusting abuse of power, and of course it only goes one way. https://t.co/aQh2QN3X8j

“As I’ve been saying. This is a disgusting abuse of power, and of course it only goes one way,” he wrote.

The president and other conservatives have long complained about technology and social-media companies treating them unfairly. Twitter has been accused of a practice dubbed “shadow banning,” which limits the visibility of a Twitter user, including in the platform’s auto-populated dropdown search box.

On Sept. 25, 2018, the Justice Department held a meeting between federal officials and state attorneys general to discuss allegations that conservative ideas are suppressed online, but so far no concrete action has been taken.

“We have to do something” about the discrimination against conservatives, Trump told reporters at the White House on March 19, with Brazilian President Jair Bolsonaro.

“It’s different than it used to be. Things are happening. Names are taken off. People aren’t getting through,” he said.