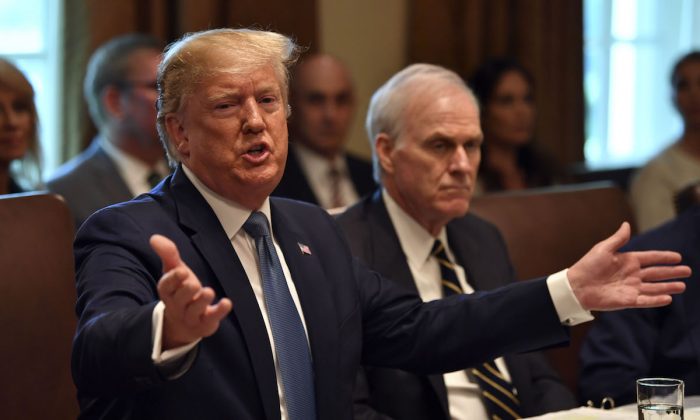 US President Donald Trump participates in a Cabinet meeting at the White House on July 16, 2019 in Washington,DC. (Nicholas Kamm/AFP/Getty Images)
Politics

Scalia would replace Alex Acosta in the role.

President Trump is likely to tap Eugene Scalia, the son of late Supreme Court Justice Antonin Scalia, to head up the Labor Department.https://t.co/egNZqRQR2E

Acosta announced he would step down last week, after an outcry over his handling of a sex abuse case involving financier Jeffrey Epstein when Acosta was a U.S. prosecutor in Florida. Epstein was arrested in New York on new federal sex trafficking charges on July 6.

Trump confirmed his nominee Thursday night on Twitter, saying that Scalia had as a lawyer “great experience working with labor and everyone else.”

I am pleased to announce that it is my intention to nominate Gene Scalia as the new Secretary of Labor. Gene has led a life of great success in the legal and labor field and is highly respected not only as a lawyer, but as a lawyer with great experience….

Scalia is a partner at a Washington-area law firm where he specializes in labor and employment matters. He was previously the top lawyer for the Labor Department.

As a lawyer, he has challenged tighter U.S. financial regulations, a rule that forced energy companies to disclose payments made to foreign governments, and an order that required more distance between orcas, or killer whales, and humans after the death of a marine life trainer at SeaWorld Entertainment Inc.