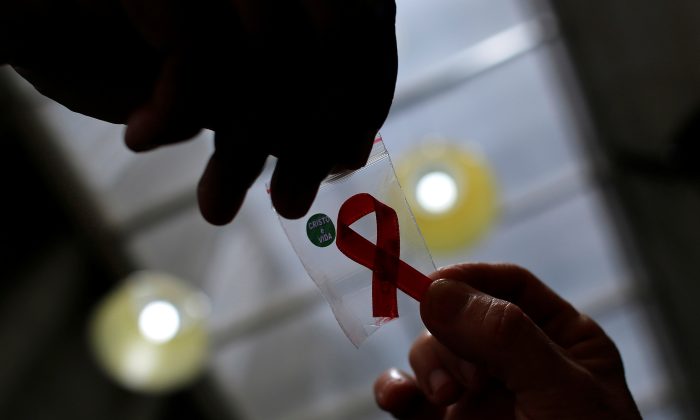 A nurse (L) hands out a red ribbon to a woman, to mark World Aids Day, at the entrance of Emilio Ribas Hospital, in Sao Paulo, on Dec. 1, 2014. (Nacho Doce/Reuters File Photo)
US News

President Donald Trump extolled the progress made in finding a cure for HIV, as a patient with the virus appears to have been cured by doctors.

The patient received a bone marrow transplant from an HIV-resistant donor—the second time an adult has been cleared of the AIDS virus in the history of the epidemic.

The HIV-positive patient, a man from Britain, received bone marrow stem cells from a donor with a rare genetic mutation that resists HIV infection. More than 18 months after, the unidentified man dubbed the “the London patient” came off antiretroviral drugs—tests still show no trace of the man’s previous infection.

“HIV Is Cured In 2nd Patient, Doctors Report, Such great news for so many. Tremendous progress being made!'” Trump wrote on Twitter, on March 5.

“HIV Is Cured In 2nd Patient, Doctors Report.” @nytimes Such great news for so many. Tremendous progress being made!

Last month, during his State of the Union address, Trump pledged to eradicate the epidemic in the United States, describing it as a “once-distant dream within reach.” In the United States, approximately 1.1 million people live with HIV today, with one in seven of them (14 percent) unaware of their infection, according to the Department of Health and Human Services (HHS).

The Trump administration plans to eliminate the virus once and for all with the expansion of four key strategies—diagnose, treat, protect, and respond—that will be implemented across the nation within the next 10 years, according to a blueprint (pdf) of the proposal released by HHS.

Additional expertise, technology, and resources will be utilized in the program that will include 48 highest-burden counties; Washington; San Juan, Puerto Rico; and seven states that have a substantial rural HIV burden.

“My budget will ask Democrats and Republicans to make the needed commitment to eliminate the HIV epidemic in the United States within 10 years,” Trump said in his February address. “Together, we will defeat AIDS in America.”

“There is no virus there that we can measure. We can’t detect anything,” said Ravindra Gupta, a professor and HIV biologist who co-led a team of doctors who treated the man.

AIDS experts said the case is a proof of the concept that scientists will one day be able to end AIDS, and marks a “critical moment” in the search for an HIV cure, but doesn’t mean that cure has already been found.

Gupta described his patient as “functionally cured” and “in remission,” but cautioned: “It’s too early to say he’s cured.”

Gupta, now at Cambridge University, treated the London patient when he was working at University College London. The man had contracted HIV in 2003, Gupta said, and in 2012 was also diagnosed with a type of blood cancer called Hodgkin’s Lymphoma.

In 2016, when he was very sick with cancer, doctors decided to seek a transplant match for him. The donor, who was unrelated, had a genetic mutation known as “CCR5 delta 32,” which confers resistance to HIV.