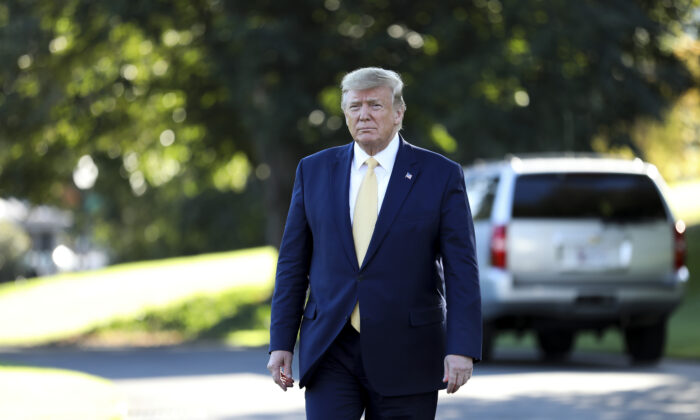 On the last day of 2019, President Donald Trump proclaimed January as “National Slavery and Human Trafficking Prevention Month,” calling the crime of trafficking an “affront to humanity that tragically reaches all parts of the world.”

In the Dec. 31 proclamation, Trump said trafficking “erodes personal dignity and also “destroys the moral fabric of society.” He said there are new trafficking victims every day in the United States, adding that in January, his administration is reaffirming their commitment to eradicating the crime.

“In all its forms, human trafficking is an intolerable blight on any society dedicated to freedom, individual rights, and the rule of law,” he said.

Trafficking is a global, everyday problem hidden in plain sight. About 1 in 800 people in the United States are living in “modern slavery,” according to 2018 data by the Walk Free Foundation. The phrase is a broad term used to describe victims of forced labor, sexual exploitation or servitude, and forced marriages, among numerous other abuses.

Trump pointed to some estimates stating that 24.9 million people around the world and in the United States, including both adults and children, are trapped in some form of human trafficking. These trafficking crimes, he said, were perpetrated by a mix of “transnational criminal enterprises, gangs, and cruel individuals.”

“Human traffickers exploit others through forced labor or commercial sex, and traffickers profit from their victims’ horrific suffering,” he said. “The evil of human trafficking must be defeated.”

Trump said that with his support, departments and agencies have continued the battle to abolish trafficking.

The Department of Homeland Security has initiated more than 800 investigations related to human trafficking, he noted, adding that the Department of State has also launched its Human Trafficking Expert Consultant Network, made up of survivors and other experts, to inform its anti-trafficking policies and programs.

He also noted that for the first time, the Department of Transportation committed $5.4 million in grants to go toward preventing human trafficking and other crimes that could occur on public transportation.

“The inherent dignity, freedom, and autonomy of every person must be respected and protected,” he said.

“This month, we renew our resolve to redouble our efforts to deliver justice to all who contribute to the cruelty of human trafficking, and we will tenaciously pursue the promise of freedom for all victims of this terrible crime.”

In April 2018, Trump signed into law a bill dubbed the “Allow States and Victims to Fight Online Sex Trafficking Act of 2017.” The act makes it easier to take legal action against individuals who use websites to facilitate sex trafficking, while also helping victims fight back against websites that profit from their exploitation.

In the same month, the FBI seized Backpage.com, the largest child-sex trafficking website in the United States. Nearly three-quarters of the cases submitted to the National Center for Missing and Exploited Children relate to ads posted on Backpage.com.