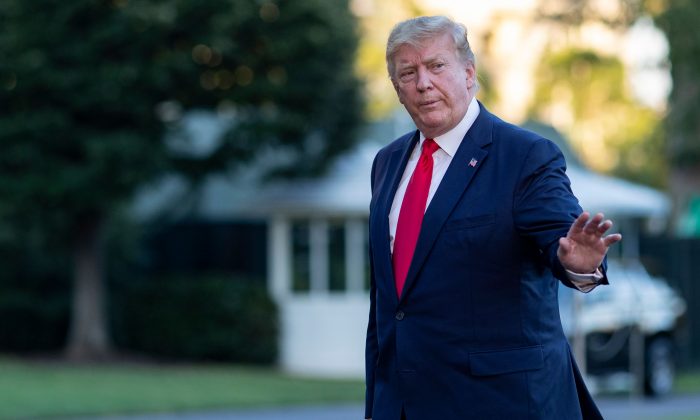 President Donald Trump waves as he arrives at the White House after a trip to Asia in Washington on June 30, 2019. (Alex Edelman/AFP/Getty Images)
Trump Administration

President Donald Trump has invited a meme creator—famous for making videos in support of Trump—to a White House event.

Carpe Donktum, the man behind the memes, posted a photo of the invitation he received on Twitter as he expressed gratitude toward the president.

Donktum said he could attend the event, which was described as a “Social Media Summit” scheduled for July 11. “The President requests the pleasure of your company,” the beginning of the invitation reads.

“Thank You realDonaldTrump for the invite,” Donktum wrote on July 1. “After working out a few issues with childcare, I happily accept! It is a great honor to have been invited!”

Donktum, who boasts more than 117,000 followers on Twitter, is a stay-at-home dad, according to his Patreon page. He said the role gives him time to pursue his passions.

“Other than my family, I love politics and making people laugh with funny, clever, and high-quality meme videos and images,” his Patreon page states.

“I have combined my love of politics and comedy and now create memes to support President Trump and MAGA,” he added.

One of the latest memes that gained traction on social media and the attention of Trump was an edited video that joked about the president staying in office “4EVA.” The video was designed to mirror the 2018 cover of TIME magazine and was done in the same style.

The animated video depicts Trump’s upcoming campaign signs starting from 2024 and going higher, set to the soundtrack of Edvard Grieg’s “In the Hall of the Mountain King.” A GIF of Trump was also added.

As the campaign signs flip past, a final sign reads “TRUMP 4EVA.” The meme video, posted on Trump’s personal account on June 21, gained more than 300,000 likes and more than 78,000 retweets as of July 2. It was also viewed more than 25.5 million times.

Trump shared the meme just days after he launched his 2020 re-election campaign with a massive rally in Florida on June 18. The president told the crowd of supporters that the choice in the upcoming election is between the radical socialism embraced by the Democratic field and his agenda of freedom and the American dream.

Donktum was also the creator behind a previous meme that edited footage of former Vice President Joe Biden’s video apology to the women who said that Biden made them feel uncomfortable when he allegedly touched them inappropriately at previous political events. The meme depicts Biden embracing himself.

The Biden meme was eventually picked up by Trump himself, who captioned the post with “WELCOME BACK JOE!”