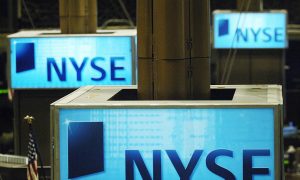 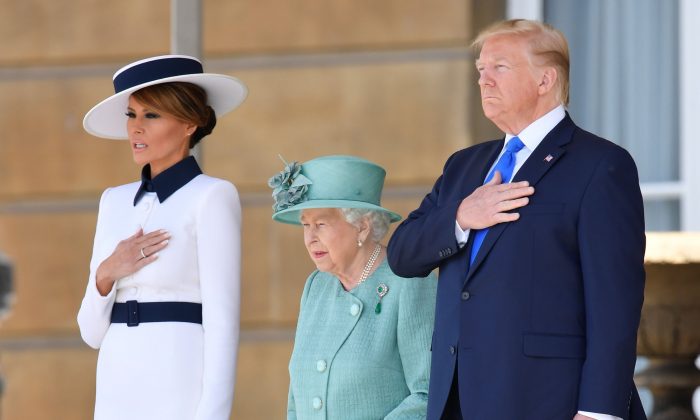 President Donald Trump touched down in London on June 3 and was welcomed with a whirlwind of pomp and pageantry, at the start of a three-day trip cast as a chance to celebrate Britain’s long-running relationship with the United States.

His first day in London included meetings with the royal family and an extravagant state dinner at Buckingham Palace. The trip—both ceremonial and official—includes a state visit, an audience with Queen Elizabeth II in London, D-Day commemoration ceremonies on both sides of the English Channel, and Trump’s first presidential visit to Ireland, which will include a stay at his own coastal golf club.

The state visit was promised by Prime Minister Theresa May back in January 2017, when she became the first foreign leader to meet Trump after he took office. Trump will meet with the outgoing prime minister on the second day of his trip, when the two leaders will converge at 10 Downing St. accompanied by senior officials.

Just before his state visit, Trump suggested in an interview with The Sunday Times that the British government should walk away from a Brexit deal with the European Union if they don’t negotiate a fair deal for the country.

May will resign as leader of the Conservative Party after she failed to take Britain out of the EU. Britain will have a new prime minister within weeks of a party leadership contest.

In a June 3 news release from the Office of the Press Secretary, the White House said that Trump seeks to strengthen economic relations with the United Kingdom through an ambitious new trade agreement. The release reiterated how Trump wants to strike an agreement with the UK after it leaves the EU, noting the nearly $1.3 trillion in foreign direct investment partnerships between the two countries.

The president later described how the first day of his London trip went “really well” and touted the strong relationship between the two countries. He added that he hadn’t seen any protests yet but was sure the “fake news will be working hard to find them.”

“The Queen and the entire Royal family have been fantastic,” he wrote on Twitter. “Tremendous crowds of well-wishers and people that love our Country.”

“Also, big Trade Deal is possible once U.K. gets rid of the shackles,” he continued, in what appeared to be a reference to Brexit. “Already starting to talk!”

London part of trip is going really well. The Queen and the entire Royal family have been fantastic. The relationship with the United Kingdom is very strong. Tremendous crowds of well wishers and people that love our Country. Haven’t seen any protests yet, but I’m sure the….

As the official ceremonies began, First Lady Melania Trump was greeted with the president at around 12:30 p.m. local time on the grand lawn of Buckingham Palace by Queen Elizabeth II. The Trumps inspected the Guard of Honor formed by the Grenadier Guards wearing their traditional bearskin hats.

Britain rolled out one of the highest honors the country can bestow on foreign leaders, with royal gun salutes firing from nearby Green Park and from the Tower of London as part of the pageantry accompanying an official state visit.

After having lunch with the queen and other senior royals, the queen gave the Trumps a guided tour of objects in the royal collection chosen for Trump’s review inside a pink-walled gallery at around 2:28 p.m. local time. The queen also showed Trump some of her family’s golfing memorabilia in a nod to the president, who owns two Scottish golf courses. He was also given a biography of Winston Churchill as a gift.

The queen’s second son, Prince Andrew, then accompanied the Trumps to Westminster Abbey, the coronation church of English monarchs for 1,000 years, where the first couple laid a wreath at the Grave of the Unknown Warrior. A group of children from the Westminster choir sang behind the couple, who stood, heads slightly bowed, throughout. The Trumps then approached the choir to greet some of the members.

The Trumps then moved on to have a private afternoon tea with Prince Charles and his wife, Camilla, at their official residence in central London at around 4:15 p.m. Prince Charles is the current heir to the throne.

The first day of a tightly scheduled trip ended with a dinner banquet at Buckingham Palace. There were 171 participants in total, including the queen, as were all the adult Trump children. The table reportedly took four days to set up.

At the banquet, Trump gave a brief speech affirming the “common values” of the two countries and praised the British people’s bravery and grit during World War II. He also called the queen’s personal role an “inspiration.”

“The bond between our nations was forever sealed in that great crusade,” he said. “As we honor our shared victory and heritage, we affirm the common values that will unite us long into the future: freedom, sovereignty, self-determination, the rule of law, and reverence for the rights given to us by Almighty God.”