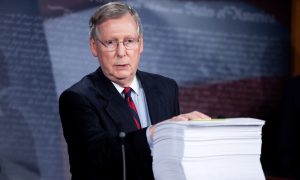 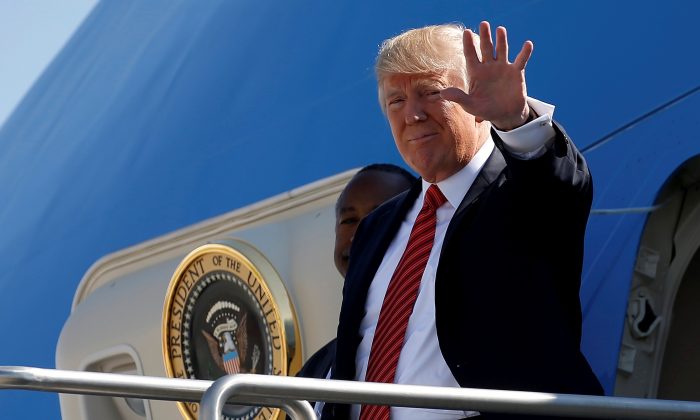 President Donald Trump waves as he steps out from Air Force One in Reno, Nevada on Aug. 23, 2017. (Joshua Roberts via Reuters)
US

WASHINGTON/CARACAS – U.S. President Donald Trump signed an executive order that prohibits dealings in new debt from the Venezuelan government or its state oil company in an effort to halt financing that fuels President Nicolas Maduro’s “dictatorship,” the White House said on Friday.

The order is Washington’s biggest sanctions blow to date against Maduro and is intended to punish his leftist government for what Trump has called an erosion of democracy in the oil-rich country, already reeling from an economic crisis.

“Maduro may no longer take advantage of the American financial system to facilitate the wholesale looting of the Venezuelan economy at the expense of the Venezuelan people,” U.S. Treasury Secretary Steven Mnuchin said on Friday.

Banning Americans from trading new bonds will make it tricky for Venezuela’s ailing state-run company PDVSA [PDVSA.UL] to refinance its heavy debt burden. Investors had expected that it would seek to ease upcoming payments through such an operation, as it did last year, which usually requires new bonds be issued.

That could push the cash-strapped company closer to a possible default, or bolster its reliance on key allies China and Russia, which have already lent Caracas billions of dollars.

The decision also blocks Venezuela’s U.S. refiner Citgo Petroleum [PDVSAC.UL] from sending dividends back to the South American nation, a senior official said, in a further blow to PDVSA’s coffers.

However, the order stops short of a major ban on crude trading that could have disrupted the oil industry and plunged Venezuela into an even more severe economic crisis amid food shortages and rampant inflation.

Venezuela, which says Washington is seeking to sabotage socialism to get its hands on Venezuela’s crude reserves, slammed the sanctions as an effort to spark a humanitarian crisis.

“These financial sanctions announced today are the worst aggressions to Venezuela in the last 200 years maybe … Maybe after the Spanish empire was defeated by our liberators,” Foreign Minister Jorge Arreaza said at the United Nations in New York.

“What do they want? They want to starve the Venezuelan people,” he added.

Venezuela’s Oil Ministry and PDVSA did not immediately respond to a request for comment.

The sanctions heap fresh pressure on PDVSA, the financial engine of Maduro’s government, which is already struggling due to low global oil prices, mismanagement, allegations of corruption and a brain drain.

Washington last month sanctioned PDVSA’s finance vice president Simon Zerpa, complicating some of the company’s operations as Americans are now banned from doing business with him.

Trump has so far spared Venezuela from broader sanctions against its vital oil industry, but officials have said such actions are under consideration. The Republican president has also warned of a “military option” for Venezuela, although White House national security adviser H.R. McMaster said on Friday that no such actions are anticipated in the “near future.”

“These sanctions are not against Venezuela, but rather the corrupt people who seek to sell the nation’s assets at a discount,” said opposition lawmaker and economist Angel Alvarado.

Venezuela has for months struggled to find financing because of PDVSA’s cash flow problems and corruption scandals have led institutions to tread cautiously, regardless of sanctions.

Russia and its state oil company Rosneft have emerged as an increasingly important source of financing for PDVSA, according to a Reuters report.

On at least two occasions, the Venezuelan government has used Russian cash to avoid imminent defaults on payments to bondholders, a high-level PDVSA official told Reuters.

“At this point our view is that the country can scrape by without defaulting this year, largely with the help of Chinese and Russian backing and by further squeezing imports. Next year is a tossup,” said Raul Gallegos, an analyst with the consultancy Control Risks.

However, China has grown reticent to extend further loans because of payment delays and corruption. Russia has been negotiating financing in exchange for oil assets in Venezuela, sources have told Reuters, but going forward it would be difficult for the OPEC member to provide enough assets to keep up loans destined for bond payments.

Venezuela’s government has around $2 billion in available cash to make $1.3 billion in bond payments by the end of the year and to cover the import of food and medicine, according to documents reviewed by Reuters.

By David Lawder and Alexandra Ulmer