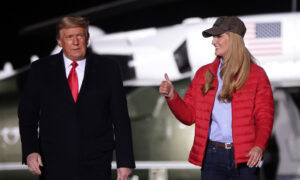 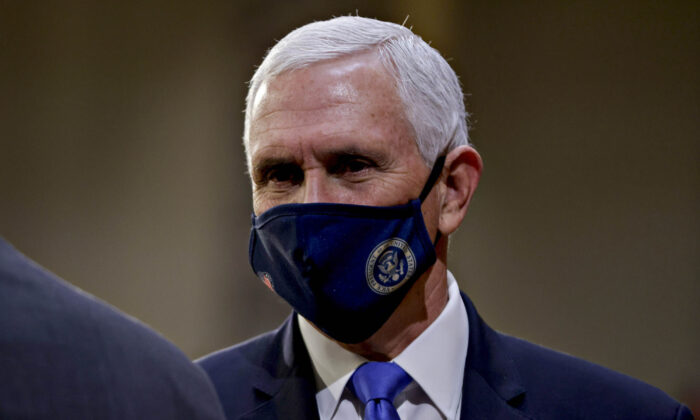 Trump: If Vice President Comes Through, ‘We Will Win the Presidency’

If Pence “comes through for us, we will win the Presidency,” Trump asserted in a tweet.

“Many States want to decertify the mistake they made in certifying incorrect & even fraudulent numbers in a process NOT approved by their State Legislatures (which it must be). Mike can send it back!” he added.

In another missive, Trump said Pence “has the power to reject fraudulently chosen electors.” He also spoke of the matter while rallying in Georgia, saying his “hope” was that Pence delivers.

The vice president serves as president of the Senate. In that role, Pence will be presiding over the joint session of Congress on Jan. 6.

The power of Pence to reject electors is disputed. Some say he can reject some electoral votes, while others argue he cannot.

According to the U.S. Constitution, electors of each state have to meet, make a list of their votes, “which they shall sign and certify,” and send those to the president of the Senate.

“The President of the Senate shall, in the presence of the Senate and House of Representatives, open all the certificates and the votes shall then be counted,” the 12th Amendment says.

The Electoral Count Act of 1887, currently known as 3 U.S. Code Section 15, says the vice president opens envelopes with the vote certificates and hands them to tellers to count. He’s then handed the envelopes back and reads the results out loud.

If there are two sets of certificates for a state, as is the case for multiple states this time around, the House and Senate separately vote on which set is legitimate. If the chambers vote differently, the set certified by the state’s governor should count.

Some argue the act constrains the power of the vice president. Rep. Louie Gohmert (R-Texas) and Arizona’s Republican slate of electors sued Pence late last year, asking a judge to declare a portion of it unconstitutional. The portion of the act “limits or eliminates his exclusive authority and sole discretion under the 12th Amendment to determine which slates of electors for a state, or neither, may be counted,” they argued.

That suit was rejected by a district judge and an appeal was dismissed.

Some believe Pence’s role is narrower. “I don’t think the vice president actually counts under the law. He’s sort of just there. This is really on Congress, ” Sen. Josh Hawley (R-Mo.) said on Fox News on Tuesday night.

Congress on Jan. 3 passed rules regulating how the joint session will be conducted.

In seven states, so-called alternate electors cast ballots for Trump. Biden was certified the winner of all seven.

In a scenario Trump and his supporters envision, Pence declares elections in certain states were run in violation of the state’s own election laws. He may mention fraud evidence or allegations. He then moves to certify the alternate slate for Trump.

Democrats dismiss that possibility, along with some Republicans. They argue the election is over and the joint session is a formality.

“I know many West Virginians are disappointed with the results of the election, but it is time to move on & put our country and our Constitution over any one person or party,” Sen. Joe Manchin (D-W.Va.) said in a statement on Tuesday.

Pence has given little indication of what he will do. He asked the judge to reject Gohmert’s lawsuit, but didn’t commit to a course of action. His spokesman said he backs efforts to object to electoral votes, a second possible, but unlikely, path to victory by Trump.

Trump’s campaign, meanwhile, said late Tuesday that Pence did not, as reported in an anonymously-sourced report, tell Trump that he doesn’t have the power to reject electoral votes.

Petr Savb contributed to this report.