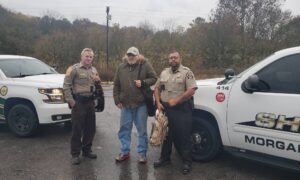 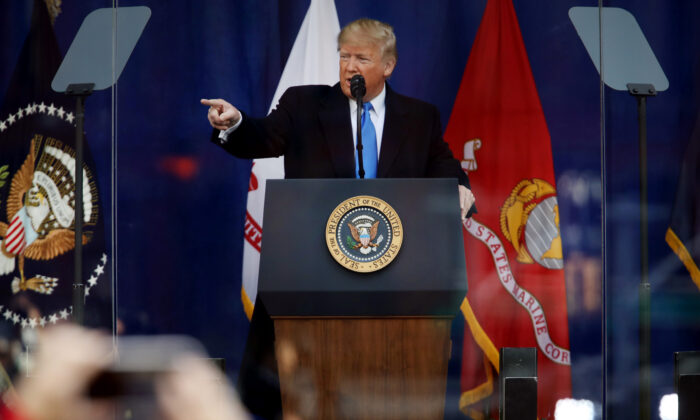 NEW YORK—President Donald Trump and First Lady Melania Trump attended this year’s Veterans Day Parade in New York on Nov. 11, making Trump the first president to accept an invitation to the largest commemoration of service in the nation. Trump said in his opening remarks that it was “truly an honor” to be there.

The parade, which was celebrating its 100th year running, featured 300 marching elements and included veterans from different eras and wars. An estimated 20,000 to 30,000 people attended the event, according to the United War Veterans Council. Scattered among them were floats, military and vintage vehicles, and other special elements.

Trump recognized the veterans of World War II in the audience and said this year’s parade specifically honors the U.S. Marine Corps, which recently celebrated its 244th anniversary.

“Today we come together as one nation to salute the veterans of the United States armed forces, the greatest warriors to ever walk the face of the earth,” Trump said. “Our veterans risked everything for us, now it is our duty to serve and protect them every single day of our lives.”

Last week, Doug McGowan, chairman of the United Veterans War Council, said Trump’s support for the parade goes back decades. He said during the 1990s Trump personally offered financial support to save the event from insolvency. For the last 25 years, veterans have invited the sitting president to attend the event. Trump was the first to accept.

Trump reflected on the events of 9/11 in his remarks, saying the country would “never forget.” He also made mention of last month’s raid against the ISIS terrorist group which resulted in the suicide of its leader, Abu Bakr al-Baghdadi.

“Thanks to American warriors, al-Baghdadi is dead, his second in command is dead. … His reign of terror is over, and his people are running very, very scared,” Trump said.

“It is truly an honor to come back to New York City right here at Madison Square Park to be the first president ever to attend America’s parade.” He later participated in a wreath-laying ceremony.

Vice President Mike Pence observed the day with a speech at Arlington National Cemetery in Virginia, where he placed a wreath at the Tomb of the Unknown Soldier.

Trump said veteran satisfaction has hit “90 percent” under his administration—the highest rate recorded in the history of the agency. He also honored Jack Foy, a WWII veteran who fought at the Battle of the Bulge. Trump said the country would be “forever proud” of what Foy did.

“We pledge to always honor our veterans,” Trump said. “You are America’s greatest living heroes and we will cherish you now, always, and forever.”

Under the current administration, the VA has done more in nearly three years to reform itself and improve the care and benefits of veterans than it has in decades, Christina Mandreucci, press secretary for the Department of Veterans Affairs (VA) told The Epoch Times in an email.

Mandreucci referenced a recent Veterans of Foreign Wars survey that found nearly three-quarters of respondents had reported improvements at their local VA and more than 90 percent said they would recommend VA care to other veterans.

Last year, Trump signed the largest funding bill for the VA in history, securing $86.5 billion for the department. The VA Accountability and Whistleblower Protection Act, which makes it easier to identify problems within the agency and improve the quality of service for veterans, was also put into law by Trump.

In 2018, the department ranked sixth out of 17 federal government agencies in the Partnership for Public Service’s most recent “Best Places to Work” survey, up from 17th place out of 18 agencies listed in 2017.

Carlos Monzon, who served in the army reserves between 2009 to 2017 and did his tour of duty in Afghanistan in 2012, told The Epoch Times that it’s critical for Americans to honor military veterans. He said this year was his first time watching the parade in person.

“They volunteered to sacrifice so much for this country,” said Monzon, who hails from New Jersey. “All it takes is just a little bit of recognition, a day to recognize them and all that they’ve done.”

Monson said parade attendees approached him on several occasions, thanking him for his service to the country. He called Trump’s decision to attend and speak at the parade a “very good gesture.”

Under the Trump Administration, veteran unemployment has reached the lowest level ever recorded. And in August, Trump signed a presidential memorandum making the process for eliminating federal student loan debt easier for permanently disabled veterans.

The directive benefits tens of thousands of struggling veterans, as only half of the roughly 50,000 qualified to have their federal loans discharged had received the benefit.

Reggie Regrut, who served in the Army Reserve from 1969 to 1971, told The Epoch Times he believes the day’s commemoration helps “unite the country.”

Regrut marched in the parade as a member of the nonprofit organization Veterans for Peace. He said every American should take some time to recognize the sacrifice military veterans have made for this country.

Vietnam War veteran Francisco Navarro told The Epoch Times he was “very, very proud” to see so many people show up with their support.

Navarro, who served in Vietnam in 1968 when he was 19 years old, said the mood at this year’s parade was “better than last year.” He said that he marches at the parade every year that he can, adding that it’s a “very significant” event.

“We should all honor those who served and those who never came back,” he said.