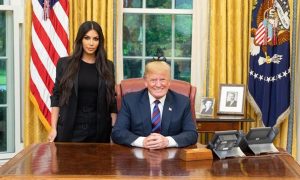 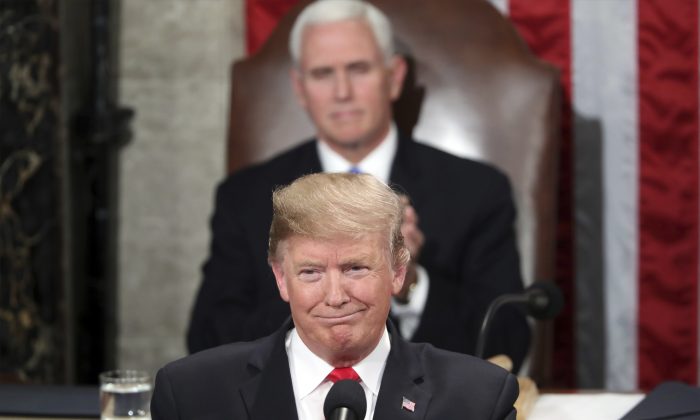 President Donald Trump delivers his State of the Union address to a joint session of Congress on Capitol Hill in Washington, as Vice President Mike Pence watches on Feb. 5, 2019. (AP Photo/Andrew Harnik)
Politics

President Donald Trump has praised two former inmates that he helped release from prison before their sentences were fully served during his State of the Union speech, saying that their experiences showed the need for criminal justice reform.

Matthew Charles of Tennessee, the first inmate to be released as a result of the bipartisan First Step Act, was one of the president’s guests on Feb. 5.

He was originally sentenced to decades in prison for drug-related charges.

“He completed more than 30 bible studies, became a law clerk, and mentored many of his fellow inmates. Now Matthew is the very first person to be released from prison under the First Step Act,” Trump said. Charles stood and applauded as others clapped, and smiled broadly.

Pres spotlights passage last year of criminal justice reform, and his commuting the sentence of Alice Johnson, moved to tears by the honor, seated as a guest in the First Lady’s box. pic.twitter.com/MrTE6i9YiN

Pres also honors Matthew Charles, also a guest of the First Lady, as “the very first person to be released from prison under the First Step Act.” “Welcome home,” the president tells him. pic.twitter.com/5UYH4Sr36G

“When I heard Alice’s story, I was deeply moved. In 1997, Alice was sentenced to prison as a first-time nonviolent drug offender. She became a prison minister, inspiring others to take a better path. She had a big impact on that prison population and far beyond. Alice’s story shows the unfairness that can exist in criminal sentencing and the need to reform this injustice,” Trump said.

“In June, I commuted Alice’s sentence. When I saw Alice’s beautiful family greet her at the prison gates … I knew I did something right. Alice is with us tonight and she is a terrific woman.” The crowd applauded Johnson, who was crying. Johnson was sitting next to Ivanka Trump, Trump’s daughter, and Jared Kushner, Trump’s son-in-law; both are White House advisors.

Trump then segued to the issue of illegal immigration.

“Now Republicans and Democrats must join forces again to confront an urgent national crisis,” Trump said. “Now is the time for Congress to show that America is committed to ending illegal immigration, and putting the coyotes and drug traffickers out of business.”

Other guests of the president included Debra Bissell, Heather Armstrong, Madison Armstrong, whose family members Gerald and Sharon David were murdered by an illegal immigrant at their home in January.

Joshua Trump, an 11-year-old boy who was bullied for years because of his last name, was also a guest, along with Grace Eline, a 9-year-old who recently finished chemotherapy and shows no signs of cancer. They sat near First Lady Melania Trump.

So my son used to ride bus 35 and I recently switched him to bus 36….because he was being punched and bullied all…

Joshua was bullied since the time President Trump announced he was running for office.

“He was being punched and bullied all because of his last name,” his mother, Megan Berto, wrote in a 2018 Facebook post.

“I’d like to ask any parents who have children that ride those buses to please talk to them,” she added.

“I had to sit down with my son and hear him tell me that he hates himself and that he feels sad all the time.

“Why is this ok? The school won’t tell you about this but I am asking you to please talk to your children. In an age where our children are depressed and suicidal don’t let your kid be a bully.”

The constant harassment left Joshua’s family struggling to figure out what to do.

Megan Berto took her husband’s name when she got married but her son has always used his mother’s maiden name as his own.

Bobby Berto, the boy’s father, told WPVI that he pulled Joshua out of school to homeschool him for a year due to the brutal bullying. The bullying continued when Joshua went back to public school, so his parents asked administrators to change his name in the school system to Berto.

In December, an anti-bullying group gave support to Joshua, awarding him their Anti-Bullying Medal of Courage.

Cerullo said that Joshua’s family told him that many of the students who bullied Joshua have apologized.

Cerullo advised Joshua’s parents not to change his last name because of the bullying, adding: “No one should have to change over the ridicule of your name.”