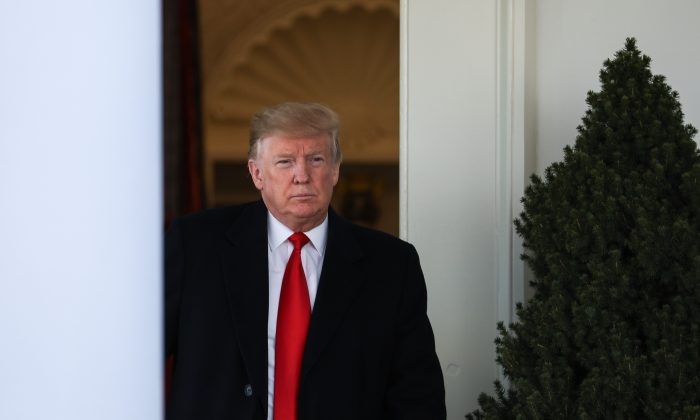 President Donald Trump—for the first time in his presidency—flipped an appeals court to a Republican majority of appointed judges with the March 12 confirmation of a nominee to the 3rd U.S. Circuit Court of Appeals.

Paul Matey was confirmed by the Senate in a 54–45 vote, which now gives the court a 7–6 majority of Republican appointees, with one more pending vacancy. The switch in the 3rd Circuit—previously dominated by nominees appointed by Democrat presidents—comes amid a Republican effort to reclaim the federal judiciary after President Barack Obama tipped the scales in Democrats’ favor in 2013.

Matey’s confirmation marks the 35th appeals court nominee who has been confirmed under Trump—a historic number at this point in the presidency. In the Senate vote, Sen. Joe Manchin (D-W.Va.) was the only Democrat who crossed the aisle to vote with the Republicans for Matey. Previously, Trump successfully appointed Stephanos Bibas and David Porter to the 14-member court of appeals.

Matey, of New Jersey, will now have a lifetime seat in the 3rd Circuit. His nomination faced opposition from two home state senators—Bob Menendez (D-N.J.) and Cory Booker (D-N.J.).

Previously, Matey served as the deputy chief counsel to former Republican New Jersey Gov. Chris Christie before joining University Hospital in Newark as senior vice president and general counsel, according to his LinkedIn account. In September 2018, he joined as a partner for law firm Lowenstein Sandler.

Neomi Rao, Trump’s nominee to take Justice Brett Kavanaugh’s previous position on the U.S. Court of Appeals for the District of Columbia Circuit, will also face a Senate vote on March 13.

Trump has accused Democrats of delaying his nominations. As of this writing, 131 positions in the U.S. District Court and U.S. Court of Appeals are still vacant, the nominees for which are waiting to be confirmed, according to Partnership for Public service, a political appointee tracker.

The number of vacancies is more than twice as many than there were under Presidents Bill Clinton or George W. Bush, according to conservative think tank The Heritage Foundation.

In January, Trump took to Twitter to vent his frustration about the slow-moving nominations.

“For FAR TOO LONG Senate Democrats have been Obstructing more than 350 Nominations,” he wrote.

“These great Americans left their jobs to serve our Country, but can’t because Dems are blocking them, some for two years-historic record. Passed committees, but Schumer putting them on hold. Bad!”

For FAR TOO LONG Senate Democrats have been Obstructing more than 350 Nominations. These great Americans left their jobs to serve our Country, but can’t because Dems are blocking them, some for two years-historic record. Passed committees, but Schumer putting them on hold. Bad!

Near the end of 2018, Senate Democrats vowed to reject any end-of-year deal on judicial nominations, a signal that they will actively block, or at least slow, any nomination in the Trump administration.

In February, Sen. Roy Blunt (R-Mo.) introduced a resolution to speed up the confirmation process. The resolution would seek to reduce the 30 hours of post-cloture debate time to two hours for most nominees. Blunt is the chairman of the Senate Rules and Administration Committee.

“The president deserves to have his team in place, regardless of whether or not one party agrees with the election results,” said Blunt. “Instead, Senate Democrats spent the first two years of the Trump administration dragging out the confirmation process to not only deny the president his team but also to waste hours of floor time that should have been spent focusing on the American people’s priorities.”