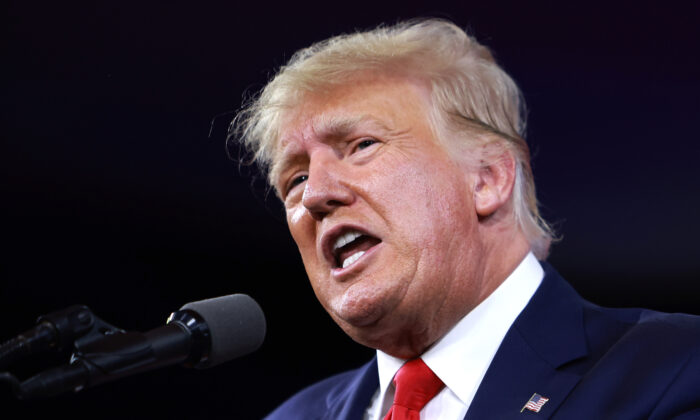 The Clinton campaign and the DNC agreed to pay a combined $113,000 to the Federal Election Commission (FEC), according to documents made public on March 30, after the commission found probable cause that the entities had violated federal law by describing payments that ultimately went to the Fusion GPS research group as going toward legal services and consulting.

Fusion used the funds, funneled through the Perkins Coie law firm, to pay for the compilation of a dossier riddled with unsubstantiated claims saying that Trump and his campaign had ties to Russian actors ahead of the 2016 election.

Clinton was the Democrat nominee in the election, while Trump, the Republican nominee, won the presidency.

The operation “was done to create … a hoax funded by the DNC and the Clinton campaign,” Trump said. “This corruption is only beginning to be revealed, is un-American, and must never be allowed to happen again.”

“Where do I go to get my reputation back?” he added.

The Clinton campaign and the DNC didn’t respond to requests for comment.

According to conciliation agreements the parties entered into with the FEC, they didn’t admit to misreporting the expenditures that funded the dossier’s creation. But they agreed to, in the future, abide by federal law that mandates reporting and accurately describing the purpose of disbursements of more than $200 per year.

Additionally, the election commission may, on the request of anyone filing a complaint, review compliance with the agreements. If the commission comes to believe the agreement has been violated, it can trigger a civil action in federal court.

Trump recently filed a federal suit against Clinton, the DNC, and others who helped create and disseminate the dossier, such as former government employee Bruce Ohr and Glenn Simpson, an ex-Wall Street Journal reporter who co-founded Fusion.

Dan Backer, an attorney who lodged the complaint with the election commission against the Clinton campaign and the DNC, told The Epoch Times that it’s the first time Clinton “has actually been held accountable for misconduct,” calling the fines “a great step for accountability.”

The amount of the fines was tied to the amount of money disbursed through Perkins Coie, or just over $1 million.

Federal law prohibits making false statements to the government, with violators facing up to five years in prison, but there are no signs at this time that the Department of Justice (DOJ) is pursuing charges, though the DOJ has charged a lawyer who represented Clinton’s campaign.

“What they did was very straightforward—they wanted to pay somebody to do some bad stuff, and they didn’t want anybody knowing that they were doing it and so, rather than disclose the payment as they’re required to do under the law, they hid it and reported it as something else,” Backer said.

“That is a violation of federal law. And the DOJ is regularly prosecuting individuals and organizations for this exact act. But for the Democrats, the rules are different.”