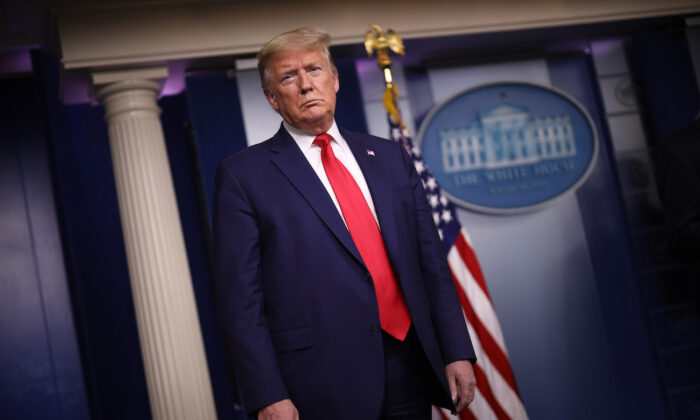 Seeking to further shore up America’s beleaguered small businesses amid the pandemic, President Donald Trump said on April 4 that he would consider increasing relief funds if they run out.

“I will immediately ask Congress for more money to support small businesses under the #PPPloan if the allocated money runs out,” Trump said in a tweet, referring to the Paycheck Protection Program that’s part of the $2.2 trillion relief bill and put in place to help small firms keep workers and pay bills during the pandemic.

It will give businesses low-interest loans of about 2.5 times their average monthly payroll. The loans will be fully or partially forgiven if businesses show that the money was used to retain or rehire employees and pay some overhead expenses through June 30.

“Nearly $350 billion in loans will be available to small businesses, including sole proprietors. These loans are up to 100 percent forgivable as long as employers keep paying their workers,” Trump said at an April 2 briefing, a day ahead of the program launch.

“Got to take care of your workers.”

But the relief scheme got off to a rocky start April 3, as hundreds of thousands tried to apply for desperately needed loans. Many small business owners ran into bureaucratic or technical roadblocks.

Treasury Secretary Steve Mnuchin, who played a pivotal role in shaping the relief package, said in a tweet April 3 that over $1.8 billion has already been allocated by the Small Business Administration (SBA), and that big banks, too, were moving ahead with processing funds.

Bank of America alone said 75,000 small businesses had applied for $7 billion in loans.

Once the bank handles the application, it goes to the SBA, which said April 3 that it had approved more than 12,460 loans valued at $3.9 billion. But it was unclear how much if any money had actually been sent to the businesses.

Some businesses found their bank wasn’t yet prepared to accept applications, and when they tried another bank, they were told that only established customers were being accepted.

“We know there will be challenges in the process,” said SBA Administrator Jovita Carranza at an April 2 briefing. “Our most important objective is to allow small businesses to keep their employees on board, and keep their businesses viable through this unprecedented disruption.”

Time will tell whether disbursement will take place efficiently enough to help businesses stave off collapse.

“This administration believes wholeheartedly that if you are a small business, you are a critical part of the economic fabric of this country, and your viability is critical to the economic well-being of your employees,” Carranza said.

Other efforts are underway to support America’s small businesses amid the outbreak of the CCP virus, commonly known as the novel coronavirus.

The Federal Reserve said on March 23 that it would soon announce its “Main Street Business Lending Program,” which it said would complement the SBA’s efforts to keep small businesses alive.

Details of the Fed’s program remain unclear, but Joe Brusuelas, chief economist at RSM, a consultancy focused on middle-market businesses in Chicago, told Inc. that he expects the program will get at least $100 billion in initial funding and could supply up to $1 trillion in new loans for midsize companies.

Federal Reserve Bank of Boston President Eric Rosengren told Bloomberg on April 1 the roll-out of the Main Street Lending Program may still be “another couple” of weeks away.

“It’s a complicated facility to appropriately scope,” he told the outlet in an interview. “We’re doing these facilities as fast as we can, and like every organization, we’re dealing with a lot of people that are working remotely from home.”

Rosengren said on April 1, at an online event hosted by the Greater Boston Chamber of Commerce, that there was more to be done to stem the fallout from the pandemic.

“We must continue to adapt as the crisis proceeds, with constant attention to the plight of workers who have been or will be laid off,” he said.

“We need to support the workers who keep our organizations and those we rely on (like grocery stores, shipping networks, and of course, health care) up and running. And we must tide over workers and businesses that see demand dry up for a while.”