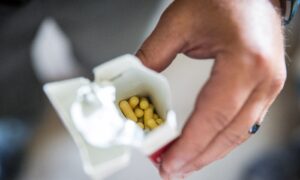 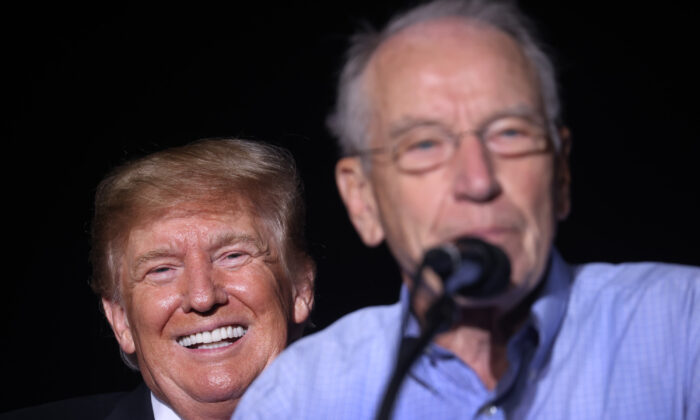 Former President Donald Trump endorsed Sen. Chuck Grassley (R-Iowa) for reelection for his eighth term as a senator at a rally in Iowa on Oct. 9.

“We have with us tonight a great American patriot, a man who truly loves Iowa,” said Trump at a rally in Des Moines.

Grassley was elected to the U.S. Senate in 1980 and will be running for senator in the 2022 elections.

Trump said that Grassley is “strong on military, strong on vets, [and] strong on our under-siege Second Amendment.”

“He helped pass the USMCA [United States–Mexico–Canada Agreement], helped confirm almost 300 federal judges and three great Supreme Court justices,” added Trump. “He was always there, especially with anything having to do with farmers.”

Grassley accepted the endorsement and thanked Trump after joining the former president on stage.

“If I didn’t accept the endorsement of a person that’s got 91 percent of the Republican voters in Iowa, I wouldn’t be too smart,” Grassley said.

“I’m smart enough to accept that endorsement,” he continued.

Grassley is currently 88 years old and, if elected for another term, will be 95 at the end of an eighth term in the Senate.

Along with 47 other Republicans, Grassley voted against raising the public debt limit on Oct. 7, while Senate Minority Leader Mitch McConnell (R-Ky.) voted for the motion. It passed 50–48.

Grassley announced his decision to run for reelection on Sept. 24.

It’s 4 a.m. in Iowa so I’m running. I do that 6 days a week. Before I start the day I want you to know what Barbara and I have decided.

I’m running for re-election—a lot more to do, for Iowa. We ask and will work for your support. Will you join us? #GrassleyRuns #GrassleyWorks pic.twitter.com/cwv8yu9wkx

Prior to the announcement, a Des Moines Register/Mediacom Iowa Poll suggested that Grassley would lead by 55 percent to 37 percent among likely voters.