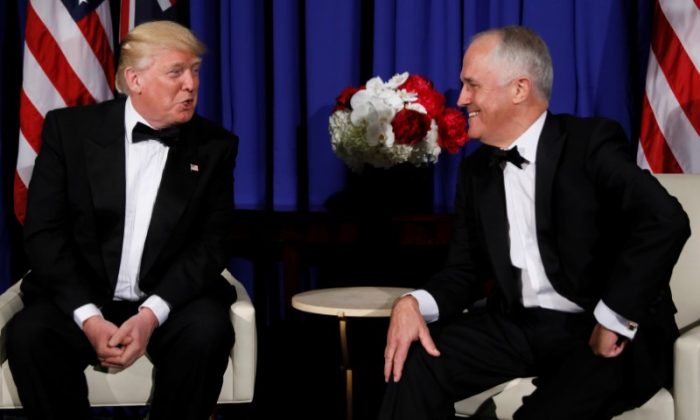 President Donald Trump (L) and Australia's Prime Minister Malcolm Turnbull (R) deliver brief remarks to reporters as they meet ahead of an event commemorating the 75th anniversary of the Battle of the Coral Sea, aboard the USS Intrepid Sea, Air and Space Museum in New York on May 4, 2017. (REUTERS/Jonathan Ernst)
International

Trump Does Not Think US Should Copy Australia’s Health System

WASHINGTON—President Donald Trump was simply saying nice things to an ally when he called Australia’s universal healthcare system better than the U.S. system, and he does not think his country should adopt a similar approach, the White House said on Friday.

“The president was complimenting a foreign leader on the operations of their healthcare system,” White House spokeswoman Sarah Huckabee Sanders said at a news briefing. “It didn’t mean anything more than that.”

Trump raised eyebrows when he told Australian Prime Minister Malcolm Turnbull on Thursday in New York, “You have better health care than we do.”

Trump spoke shortly after he led a White House rally with Republicans from the House of Representatives, who had just passed legislation to overturn much of former President Barack Obama’s signature healthcare law and move further away from a guarantee of universal coverage.

That measure, opposed by Democrats, must clear the Senate before Trump can sign it into law.

“Of course the Australians have better healthcare than we do – everybody does,” Trump tweeted on Friday. “ObamaCare is dead! But our healthcare will soon be great.”

Of course the Australians have better healthcare than we do –everybody does. ObamaCare is dead! But our healthcare will soon be great.

Independent scorekeepers at the Congressional Budget Office have not yet analyzed the bill, but they estimated an earlier version would have led to 24 million fewer Americans with insurance coverage than under current law.

Australia’s government plays a larger role in its health system. The country provides free hospital treatment and subsidized medical care for all residents through a publicly funded program. Roughly half of Australians choose to buy private coverage, which provides them with greater choices.

Huckabee Sanders said Trump’s remarks do not mean he thinks the United States should adopt a similar system.

“I think he believes that they have a good healthcare system for Australia,” she said. “What works in Australia may not work in the United States.”