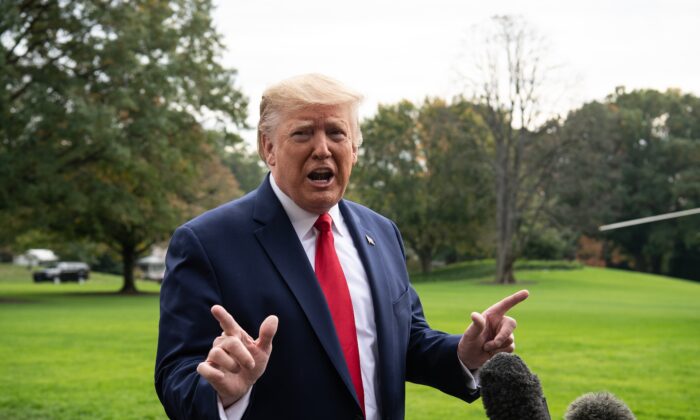 President Donald Trump speaks to the press before departing for South Carolina at the White House in Washington, on Oct. 25, 2019. (Nicholas Kamm/AFP via Getty Images)
Politics

President Trump said there is no need for an impeachment defense team because, according to him, “I’m the team.”

Speaking to reporters before he departed to South Carolina, Trump said, “Here’s the thing. I don’t have teams. Everyone’s talking about teams. I’m the team. I did nothing wrong. It’s been going on from before I was elected.”

Trump also slammed House Democrats’ impeachment inquiry into whether he used his office to put pressure on Ukraine to investigate Joe Biden and his son, Hunter. On Friday, he against denied the allegations, calling them “a hoax” and “phony.”

“I did nothing wrong,” he said. “I know that people are still in a basement [at the Capitol], in a secure room in the basement, trying to make us look as bad as possible, but that’s not working too well.”

Should he be impeached and removed from office, he said an economic downturn would ensue.

“I will say this: If anything ever happened with this phony witch hunt that the Democrats are doing … I really believe you’d have a recession, depression the likes of which this country hasn’t seen,” Trump stated.

The president said that Democrats are wasting Americans’ time with the inquiry and aren’t accomplishing anything in the process. Voters, he argued, want action taken on trade, drug pricing, and gun laws.

Senate Republicans introduced a resolution Thursday that condemned the House inquiry for its secrecy and alleged it lacks fairness.

“A lot of things are happening very good, and I appreciate Republicans are just outraged and the American public is outraged that the do-nothing Democrats are doing nothing,” Trump said. “Frankly, the Democrats should be ashamed of themselves,” he added.

Meanwhile, he said that his administration is making positive steps forward.

Trump pointed to the stock market, saying “we have the best jobs report” and the “best unemployment numbers.”

“More people are working in the United States than ever before,” he said, adding that “a lot of great things are happening in this country.”

His comments come as House Democrats on Friday sent out more subpoenas in their impeachment inquiry to White House officials who have also indicated that they wouldn’t voluntarily testify.

The subpoena letters were issued to Russ Vought (pdf), President Trump’s acting budget director; Michael Duffey (pdf), a senior official in the Office of Management and Budget; and T. Ulrich Brechbuhl (pdf), counsel at the U.S. Department of State.

“Your failure or refusal to appear at the deposition, including at the direction or behest of the President or White House, shall constitute evidence of obstruction of the House’s impeachment inquiry and may be used as an adverse inference against the President,” the letter to Duffey stated.