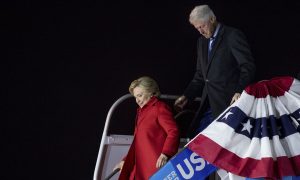 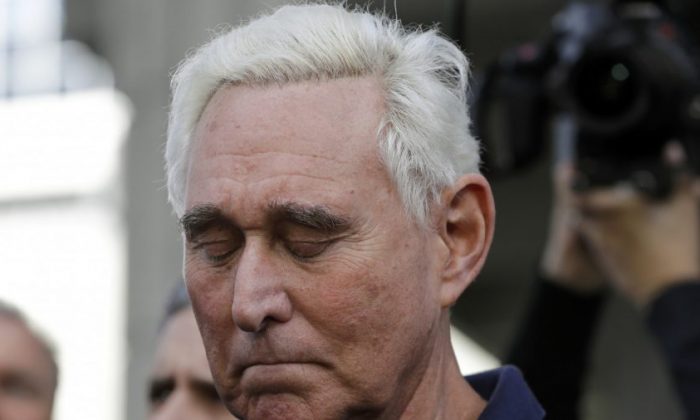 President Donald Trump denounced the arrest of Roger Stone, who briefly worked on his campaign in 2015.

Stone was arrested at his home in Florida by a bevy of heavily armed FBI agents. The arrest was captured live by CNN.

“Greatest Witch Hunt in the History of our Country! NO COLLUSION! Border Coyotes, Drug Dealers, and Human Traffickers are treated better,” Trump said via Twitter on Jan. 25, hours after the pre-dawn arrest.

He added: “Who alerted CNN to be there?”

Greatest Witch Hunt in the History of our Country! NO COLLUSION! Border Coyotes, Drug Dealers and Human Traffickers are treated better. Who alerted CNN to be there?

CNN, which has become openly hostile to Trump, tried to explain how its reporters knew the arrest was impending while claiming no law enforcement officials leaked info.

It was the “result of determined reporting and interpreting clues,” CNN Communications responded on Twitter.

The statement linked to an interview with David Shortell, listed as a “crime and justice producer.” Shortell didn’t explain how CNN knew to be at the scene.

Other CNN employees claimed that Shortell noted some activity in Washington and hopped on a plane.

“Shortell noted some unusual activity with grand jury in DC yesterday, trusted his instincts, got on a plane and made it to Stone’s house in time to catch the FBI going in,” claimed Kate Bennett, a CNN reporter.

“There was unusual grand jury activity yesterday so decided to stake out—a decision any other reporter/outlet could have made,” said MJ Lee, another CNN reporter.

Shortell in another clip aired on CNN claimed that the “unusual activity” was that the grand jury met on Thursday this week when it typically meets on Friday, though he admitted that other information played a role.

“Robert Mueller’s grand jury typically meets on Fridays. Yesterday, Thursday, there was grand jury activity,” Shortell explained. “We also had some other signs that maybe something was going on this angle, the Roger Stone angle. So we showed up at his house this morning, we were the only ones there, and lo and behold the FBI agents did come and arrest him.”

It is no conspiracy – CNN either acted on a tip…or had been camped out there (either is good journalism.) What is most interesting is why it was a raid and not a surrender. Fear of flight or destruction of evidence or prosecutors really not like Stone? https://t.co/zxPtxUzzWE

But a number of analysts and reporters said that it appeared CNN was tipped off. A law enforcement leak to the media regarding the arrest would be wrong, they said.

“Regardless of what anyone thinks of Stone, this isn’t ok. The government shouldn’t be tipping off media outlets to add to the humiliation of citizens arrested in their homes for the amusement of the mob,” said Buck Sexton, a Hill host.

“You don’t have to be a Roger Stone fan to be horrified by the stunt the FBI pulled off in conspiring with CNN this morning. The completely unnecessary raid is a routine that is straight out of a third-world police state. There is no defense of such an excessive show of force,” added Jordan Schachtel, a foreign policy and national security analyst for Conservative Review.

“President needs to have the FBI director in front of his desk this morning explaining exactly why an American citizen was assaulted by a SWAT team with tipped off cable news cameras. He should ask for the written safety analysis that showed this was required. There isn’t one,” added Townhall columnist Kurt Schlichter.

Regardless of what anyone thinks of Stone, this isn’t ok.

The government shouldn’t be tipping off media outlets to add to the humiliation of citizens arrested in their homes for the amusement of the mob https://t.co/nNAsa0T0in

“No matter how one paints it CNN had special treatment to get access to the raid—as a volunteer member of law enforcement in VA, media, even if ‘tipped off’ would not be allowed to be anywhere near the execution of a raid—this was a dramatic set up allowed by the FBI,” said Tony Shaffer, a retired U.S. Army Reserve Lieutenant Colonel.

Stone is the latest person charged through Special Counsel Robert Mueller, who was appointed in May 2017 to investigate allegations of collusion between the Trump campaign and Russia.

Stone was arrested on accusations of making false statements, obstructing an official proceeding, and witness tampering.

The indictment against Stone does not allege that Stone or anyone in the Trump campaign colluded with Russia. Mueller has indicted several Trump-campaign associates but has not charged anyone for colluding with Russia.

After being released on bond on Friday afternoon, Stone said that he’ll plead not guilty and that he was falsely accused.