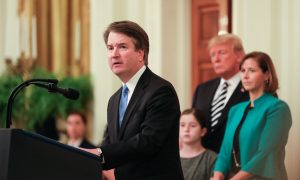 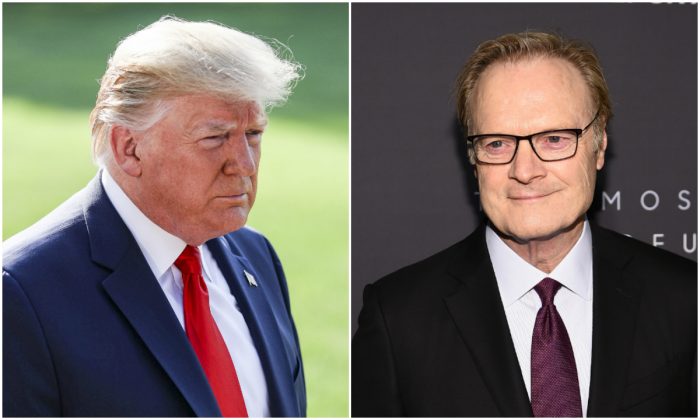 President Donald Trump’s lawyer issued a notice to NBC Universal over a report made by host Lawrence O’Donnell, who admitted on-air that the information he shared was not verified.

Charles Harder of Harder LLP—which has won a string of cases for Trump and First Lady Melania Trump, including millions of dollars from the Daily Mail and the dismissal of pornographic film actress Stormy Daniels’s lawsuit against the president—sent the letter to lawyers representing NBC Universal.

Lawrence O’Donnell, host of MSNBC’s “The Last Word,” appeared on Rachel Maddow’s show on Aug. 27 and made an explosive claim he acknowledged was thinly sourced. He said that Trump obtained loans from a bank and that the loans were co-signed by Russians.

“I may have some information, in this next hour, which would add a great deal to their understanding of that, if true, and I’ll be discussing it here,” O’Donnell said.

“I stress ‘if true,’ because this is a single source who has told me that Deutsche Bank obtained tax returns.”

O’Donnell later said: “I stress ‘if true'” again and repeated that the claim was sourced from a single person whom he did not name.

He added later that the claim would “need a lot more verification before that can be a confirmable fact.”

The unverified report is the latest in a slew of reports claiming Trump is close with Russia that have later turned out to be false. Ratings for MSNBC have dropped dramatically since special counsel Robert Mueller announced earlier this year his team couldn’t establish collusion between Trump and Russia, puncturing a conspiracy theory that was heavily promoted by a number of networks, including MSNBC and NBC News.

In the letter to the company, Harder wrote: “These statements are false and defamatory and extremely damaging. The only borrowers under these loans are Trump entities and Mr. Trump is the only guarantor.”

“Numerous documents for each of these loans are also recorded, publicly available and searchable online. Thus, actual malice can easily be proven based on your reckless disregard of the truth and unreasonable reliance on an alleged ‘source’ who you will not even identify in your story and likely is seeking to mislead you and the public for political reasons or other ulterior motives,” he continued.

“Demand is hereby made that Mr. O’Donnell and NBCU immediately and prominently retract, correct, and apologize for the aforementioned false and defamatory statements,” he said.

Harder demanded that NBC Universal confirm in writing within 24 hours that it would take the requested action on the report.

“Failure to do so will leave my clients with no alternative but to consider their legal options which could include immediate legal proceedings against Mr. O’Donnell and NBCU,” Harder said.

A spokesman for NBC Universal did not immediately respond to a request for comment from The Epoch Times, which asked whether its standard practice is to run stories based on single anonymous sources and whether an apology or retraction would be forthcoming.

Michael Del Moro, a producer at MSNBC, said earlier Wednesday that the information that O’Donnell spread “came from a single source who has not seen the bank records.”

“NBC has not seen those records and has not yet been able to verify the reporting,” he added.

White House press secretary Stephanie Grisham said in a statement to Fox News: “This is one of the reasons that a majority of Americans have lost trust in the media. Instead of applying ethics and standards to their reporting, journalists and left-wing outlets have weaponized the media, using it to attack and harass people with little to no regard for the truth.”

Cornell Law School professor and media critic William Jacobson added to Fox: “Even if tempered with an ‘if true’ caution, there still needs to be a solid basis for believing it is true. Otherwise, pure speculation and wishful thinking takes the place of news reporting.”