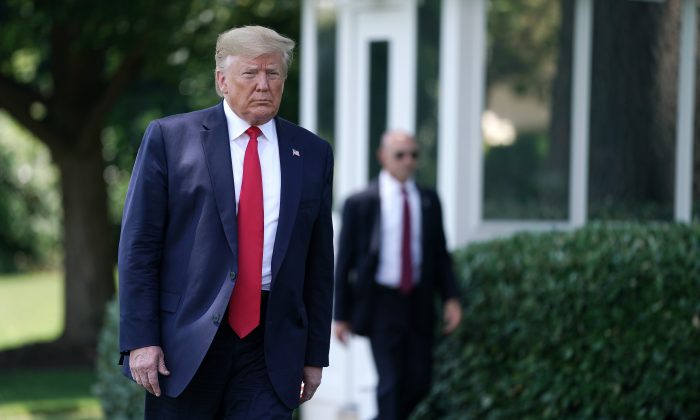 In a series of Twitter posts, President Donald Trump offered his support to Home Depot and its co-founder, Bernie Marcus, after some people said they would boycott the home improvement chain following a statement by Marcus that he would donate to Trump’s reelection campaign.

Marcus recently said in an interview with The Atlanta Journal-Constitution (AJC) that he would donate part of his massive fortune to Trump’s 2020 campaign. According to Forbes, Marcus has a total net worth of $5.9 billion.

The billionaire donated $7 million to Trump’s 2016 presidential campaign, according to the Center for Responsive Politics; Marcus didn’t reveal how much he specifically planned to donate this time.

In response to Marcus offering his support for the president, reports emerged of people threatening to boycott the store, with the #BoycottHomeDepot hashtag trending on Twitter at some point.

Trump, on July 9, launched a defense of Marcus in response to the boycott call.

“A truly great, patriotic & charitable man, Bernie Marcus, the co-founder of Home Depot who, at the age of 90, is coming under attack by the Radical Left Democrats with one of their often used weapons,” Trump wrote.

A truly great, patriotic & charitable man, Bernie Marcus, the co-founder of Home Depot who, at the age of 90, is coming under attack by the Radical Left Democrats with one of their often used weapons. They don’t want people to shop at those GREAT stores because he contributed….

Trump said the Democrats don’t want people to shop at the chain because of Marcus’s donation to him. He described the people spreading the boycott threats as “vicious and totally crazed.”

“Remember, there are far more great people (‘Deplorables’) in this country, than bad. Do to them what they do to you,” he said. “Fight for Bernie Marcus and Home Depot!”

….to your favorite President, me! These people are vicious and totally crazed, but remember, there are far more great people (“Deplorables”) in this country, than bad. Do to them what they do to you. Fight for Bernie Marcus and Home Depot!

In his AJC interview, Marcus praised Trump for his “businessman’s common sense approach to most things” and said that under his administration, the country is “better off today than we were eight years ago or six years ago.”

Marcus also said while he does not agree “with every move that [Trump] makes,” he said the president has still “produced more than anybody else.”

Marcus, a philanthropist, told the newspaper that he plans to give away billions more, which would account for most of his current remaining wealth.

Representatives for Home Depot didn’t immediately respond to a request for comment from The Epoch Times, but a spokesperson told MarketWatch that Marcus retired from the chain more than 15 years ago.

The spokesman, citing Marcus’s retirement, said he “isn’t speaking on behalf of the company. In fact, as a standard practice, the company does not endorse presidential candidates.”

Some offered their support to the home improvement chain and criticized those trying to bring the company down.

Marcus told the newspaper that he hopes to donate most of his money while he’s still able to. He recently suffered from a bout of pneumonia and had a heart valve replacement.

“I want to live to be 100, because I want to be in a position to give it away to those things that I really believe in,” he told the AJC.

“Everything I live for now is finding the right things to put my money into and that can give me a rate of return in emotion and doing good things for this world.”