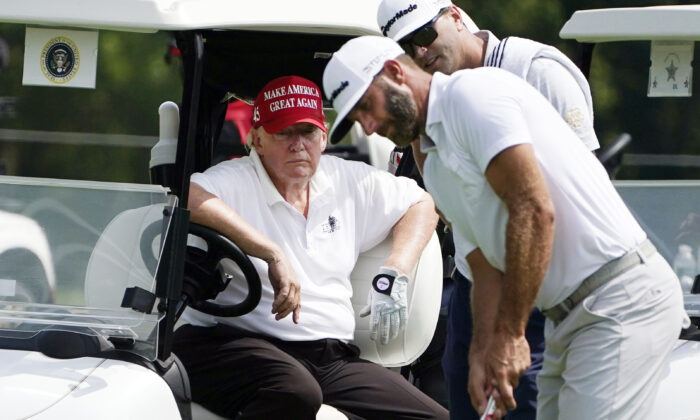 Former President Donald Trump sits in a golf cart as he watches Dustin Johnson putt during the pro-am round of the LIV Golf Invitational Bedminster at Trump National Golf Club Bedminster in N.J. on July 28, 2022. (Seth Wenig/AP Photo)
Donald Trump

Trump Defends His Hosting of Saudi-Backed Golf Tourney, Says ‘Nobody’s Gotten to the Bottom of 9/11’

Former President Donald Trump defended his decision to host a golf tournament financed by Saudi Arabia at Trump National Golf Club Bedminster in New Jersey amid mounting criticism from the families of those who died on Sept. 11, 2001.

U.S. intelligence officials have concluded that the crown prince approved of an operation to capture or kill Jamal Khashoggi, a columnist for The Washington Post, in 2018.

Saudi officials have denied any involvement by the crown prince. However, Saudi Arabia has also been criticized for its human rights abuses in Yemen and its crackdown on political dissidents at home, among other issues.

“Nobody’s gotten to the bottom of 9/11, unfortunately,” Trump told ESPN ahead of the July 29 tournament.

“They should have, as to the maniacs that did that horrible thing to our city, to the country, to the world. So, nobody’s really been there,” Trump said. “But I can tell you that there are a lot of really great people that are out here today, and we’re going to have a lot of fun and we’re going to celebrate.”

The former president also said that he has “known these people for a long time in Saudi Arabia” and that they own substantial percentages of many American companies.

On July 26, two days before the start of the LIV tournament, a group called 9/11 Justice Inc. published a 30-second advertisement titled “Never Forgive,” in which family members of 9/11 victims vowed never to forgive the LIV Golf competitors for accepting “blood money” while stating that it was “disgusting” that the golf tournament would be taking place about 50 miles from ground zero.

In a July 17 letter to Trump (pdf), the group wrote that the evidence regarding the Sept. 11 attack was “more clear than ever” and that “the Saudi nation is largely responsible for the death of our loved ones and for this horrific attack on America. And you know it.”

Nearly 3,000 people died in the Sept. 11 attacks. U.S. intelligence documents state that 15 of the 19 hijackers involved in the attacks were Saudi nationals.

Award money for the LIV Golf tournament totaled $25 million, with a $4 million prize for the individual winner and enough for every competitor to take home a six-figure check, Golf Digest reported.

The hefty monetary prize has attracted a string of high-profile players from the PGA tour.

The PGA Tour has responded by suspending players who joined the LIV Golf series for violating regulations that require a release to play overseas. The PGA Tour does not grant releases for tournaments held in North America.

“The PGA was not loved by a lot of the players, as you know, for a long time,” Trump told ESPN. “Now they have an alternative and nobody ever would have known it was going to be a gold rush like this.”