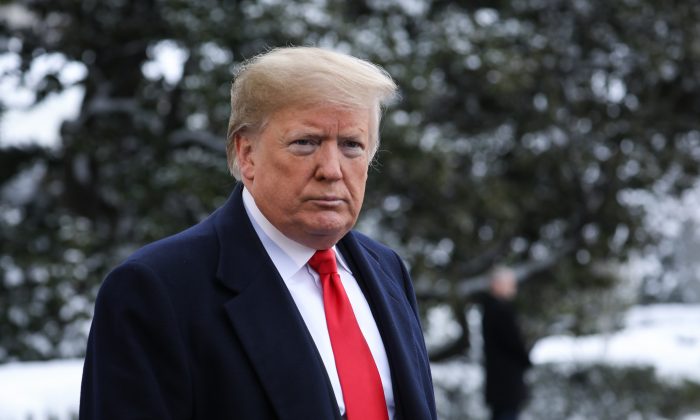 President Donald Trump criticized socialist policies proposed by political opponents in his latest remarks on Venezuela on Jan. 24—specifically, taking aim at the 70 percent tax rate for the wealthy that was proposed by Democratic Rep. Alexandria Ocasio-Cortez (D-N.Y.).

Trump made these remarks when speaking at the meeting with Republican members of Congress on the United States Reciprocal Trade Act. He was asked by a member of the press about the crisis in Venezuela.

The socialist South American country has been making headlines over the past few days after its dictator, Nicolás Maduro, refused to step down over mounting international pressure. The United States refuses to recognize him as the Venezuelan leader because of a fraudulent election and instead officially recognized his opponent, Juan Guaidó, as the interim president. The country has since spiraled into political chaos, exacerbated by its failing economy.

In retaliation, Maduro has ordered all Venezuelan diplomats home from the United States and is closing its embassy, while the United States is seeking to cut off all funding to Maduro’s regime. An exiled Venezuelan Supreme Court chairman Justice Miguel Angel Martin told The Epoch Times in a previous report that Maduro is a “former president” and the Venezuelan military should “fulfill their duty” and detain Maduro.

Trump called the crisis in Venezuela a “very, very sad situation” and took the opportunity to comment on political opponents that want to enact similar policies in the United States.

“Well, we’re looking at Venezuela. It’s a very sad situation,” Trump said. “That was the richest state in all of that area. That’s a big, beautiful area, and by far the richest. And now it’s one of the poorest places in the world.”

“That’s what socialism gets you when they want to raise your taxes to 70 percent,” he added.

“You know, it’s interesting, I’ve been watching our opponents—our future opponents—talking about 70 percent,” he said. “Number one, they can’t do it for 70 percent. It’s got to be probably twice that number. But, maybe more importantly, what happens is, you really have to study and take a look at what’s happened to Venezuela.”

He added that the United States is watching Venezuela very closely.

The 70 percent tax rate Trump referred to was proposed by 29-year-old Ocasio-Cortez—the youngest woman ever elected to Congress—in her plan to fund an ambitious new environmental agenda she has backed dubbed the “Green New Deal.”

Ocasio-Cortez, who was sworn into the House of Representatives on Jan. 3, suggested higher tax rates for higher income brackets, reaching as high as 70 percent on the top earnings of the richest in an interview with journalist Anderson Cooper. The plan was dubbed “radical” by Cooper.

The “Green New Deal” plan aims to eliminate carbon emissions within just 12 years. On Twitter, Ocasio-Cortez described it as “a wartime-level, just economic mobilization plan to get to 100% renewable energy ASAP.”

“You know, you look at our tax rates back in the ’60s and when you have a progressive tax rate system, your tax rate, you know, let’s say, from zero to $75,000 maybe 10 percent or 15 percent, et cetera,” she said in the interview.

“But once you get to, like, the tippy tops, on your 10 millionth dollar, sometimes you see tax rates as high as 60 or 70 percent. That doesn’t mean all $10 million are taxed at an extremely high rate, but it means that as you climb up this ladder you should be contributing more.”

As a member of the Democratic Socialists of America, Ocasio-Cortez believes in universal health care, free college tuition, and the abolishment of Immigration Customs Enforcement.

Meanwhile, Trump and the GOP have advocated for the slashing of taxes, arguing that it would boost the economy and give money back to Americans. Democrats have opposed this and call for higher taxes to fund a number of welfare programs.