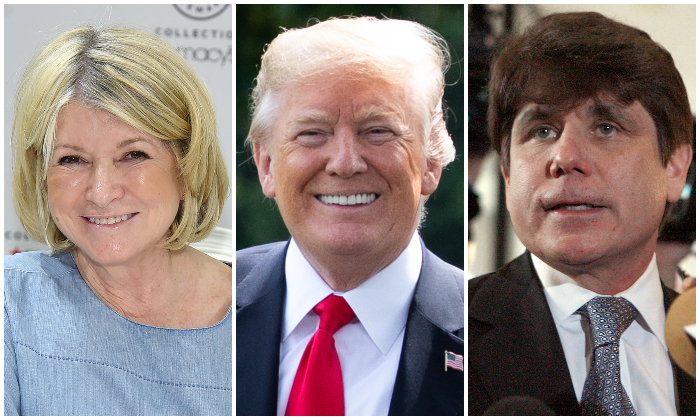 The president revealed his plans to reporters aboard Air Force One on Thursday, May 31, while discussing a pardon he issued the same day for the author, lecturer, and filmmaker Dinesh D’Souza.

D’Souza is a Republican. Trump pointed out that he is considering a pardon for Blagojevich even though the former Illinois governor is a Democrat.

Blagojevich was elected as governor of Illinois in 2002. He was later impeached, removed from office for corruption, and sentenced to federal prison.

“Eighteen years in jail for being stupid and saying things that every other politician, you know that many other politicians say,” Trump said. “I don’t know him other than that he was on ‘The Apprentice’ for a short period of time.”

“And he’s a Democrat. He’s not my party,” Trump added. “But I thought that he was treated unfairly.”

Trump also mentioned that he is considering a pardon for Martha Stewart.

Stewart was convicted on charges of securities fraud and obstruction of justice for using insider information to avoid losing $45,673 on shares she held in the ImClone Systems stock. After a highly publicized trial, she was sentenced to five months in prison and two years of supervised release.

“I think to a certain extent Martha Stewart was harshly and unfairly treated,” Trump said. “And she used to be my biggest fan in the world before I became a politician. But that’s ok. I don’t view it that way.”

Trump mentioned that when he called D’Souza for three minutes on Wednesday, the author “nearly had a heart attack.”

After producing the Obama documentary, D’Souza was prosecuted and given an unusually harsh sentence for a minor infraction of the campaign finance law.

“Mr. D’Souza was, in the President’s opinion, a victim of selective prosecution for violations of campaign finance laws. Mr. D’Souza accepted responsibility for his actions, and also completed community service by teaching English to citizens and immigrants seeking citizenship,” White House Press Secretary Sarah Sanders said in a statement. “In light of these facts, the President has determined that Mr. D’Souza is fully worthy of this pardon.”

D’Souza is also the author of The Big Lie, which traces the roots of the American left to Nazism.