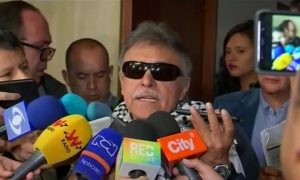 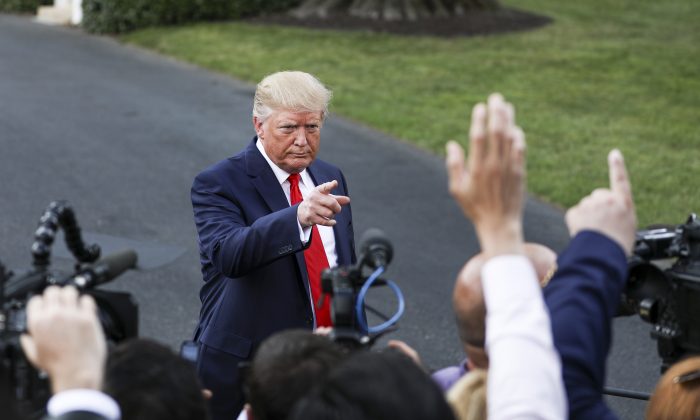 President Donald Trump told reporters on Aug. 1 that he is considering implementing a blockade or quarantine on Venezuela due to the foreign involvement of countries such as Russia and China.

Trump made the revelation in response to a question on the South Lawn of the White House before he departed on Marine One. Under Venezuela’s illegitimate dictator, Nicolás Maduro, the country for years has been fed billions of dollars from Russia and China through loans and energy deals.

“You are considering it?” a reporter asked Trump after introducing the question.

Trump did not elaborate any further on the consideration as he departed the White House.

Venezuela’s legitimate interim president, Juan Guaidó, has the backing of more than 50 nations internationally, including the United States. The Trump administration this year has continued to step up sanctions against Maduro’s regime.

Maduro has refused to back down and still has control of Venezuela’s military. The United States has continued to pressure Maduro’s regime, mostly through diplomatic and economic routes. Both Guaidó’s representatives and the United States have not entirely ruled out military options as they push for Maduro to step down.

Carlos Vecchio, Venezuela’s ambassador to the United States, said at a Washington event on July 30 that talks to end the deadlock will resume this week with Maduro’s embattled government.

U.S. Commerce Secretary Wilbur Ross on Aug. 1 also talked about a plan to rebuild Venezuela’s dead economy and “reverse the impact of socialism,” at a meeting in Brasilia.

“Venezuela will continue to deteriorate until the internationally recognized government of Juan Guaidó is able to implement needed economic, political, and social reforms,” he said at the event.

“The short term is immediate humanitarian and other relief in the first one to two months, the medium term is work to reverse the impact of socialism in months three through twelve, and the long term effort is to restore sustainable economic growth.”

Ross noted that infrastructure investments would be integral for their plan to work, noting that the Guaidó government so far has identified over “20 critically important energy, infrastructure, and environmental projects” needed for Venezuela’s economy to recover.

He said the key investment projects would focus on areas including electricity, gas, sewage, and water as well as physical infrastructures.

Vecchio said in an interview with NTD News that should Guaidó officially take over, they “would recognize all legal debts” they have acquired in Venezuela, referring to Russia and China.

“Just keep in mind that the only way to have a clear path in Venezuela is recovering our democracy,” he continued. “Because with Maduro, [Russia and China] will never get paid back. The only option that they have is to work together with us, to recover our country and they will be able to get repaid.

“We have sent those messages to China and to Russia,” he said at the National Press Club. “They need to be part of the solution instead of being part of the problem.”

Vecchio said they haven’t received any “positive response” yet from the two countries. Vecchio was appointed to the post by Guaidó in January. He also noted that the United States has become one of its most important allies.

“This is a new message that we sent to them. … They have at least recognized that there is a political crisis and that crisis has to be resolved.”

The ambassador also said they are continuing discussions with Maduro’s inner circle about the “exit of Maduro.”

“We have been in contact with some of them, … the important people … relevant people that could facilitate a transition in our country,” he said.

“This is a matter of time, that is the way we see it. … We see this as an ongoing process instead of one single event. We are now in a better position than we were six months ago in how we could confront the dictatorship.”

More than 200 military officers under Maduro’s regime are in prison, according to Vecchio. “That tells you that the military forces are looking also for a change,” he said.

Socialist policies introduced by Maduro and his predecessor, Hugo Chavez, have crippled Venezuela in less than two decades. Food and medicine shortages, hyperinflation, and violent crime have driven more than 3 million Venezuelans out of the country, according to the U.N. refugee agency.