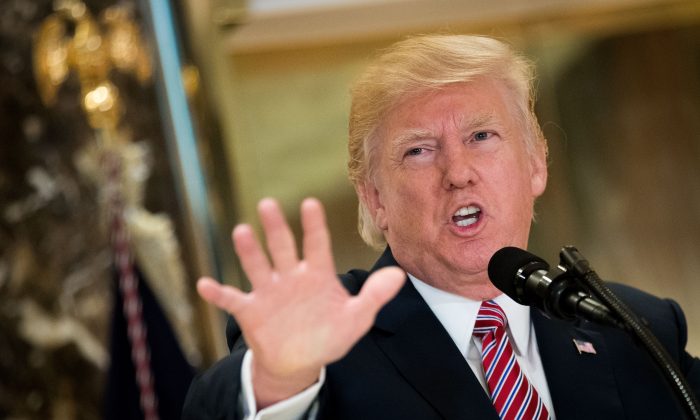 Trump Condemns Violence on Both Sides in Charlottesville

NEW YORK—President Donald Trump said there were two sides to the Aug. 12 violence in Charlottesville, Virginia, calling out both white supremacists and left-wing protesters.

“You had a group on one side and you had a group on the other, and they came at each other with clubs, and it was vicious, it was horrible,” Trump said at a press conference in response to a reporter who asked whether Trump was “calling the alt-left and white supremacists on the same moral plane,” at a press conference that was intended to be about infrastructure, at Trump Tower in New York on Aug. 15.

Trump reiterated a statement he made on Aug. 12 after a man drove a car into a left-wing counter protest at a white nationalist rally, killing one woman.

“We condemn in the strongest possible terms this egregious display of hatred, bigotry and violence. It has no place in America,” he said.

But the president said that while neo-Nazis should be condemned in the strongest terms, there were also people who had come to the rally to legitimately and peacefully protest against the removal of the statue of Confederate Gen. Robert E. Lee.

Trump said the counter protesters, who did not have a permit to be there, were also to blame for the violence.

“What about the alt-left that came charging? … They came charging with clubs in their hands, swinging clubs. Do they have any problem? I think they do,” Trump said.

Trump specifically called out, albeit not by name, the Antifa group, a communist and anarchist group that has been behind a series of violent protests.

“You see them come with the black outfits and with the helmets and the baseball bats. You had a lot of people in the other group,” he said.

Toward the end of the press conference, Trump commented on the “beautiful statement” sent to him by the mother of Heather Heyer, the woman killed on Aug. 12 in Charlottesville. Heyer’s mother, Susan Bro, wrote in response to Trump’s statement on Aug. 12, “Thank you, President Trump, for those words of comfort and for denouncing those who promote violence and hatred.”