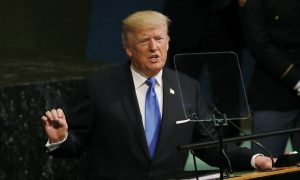 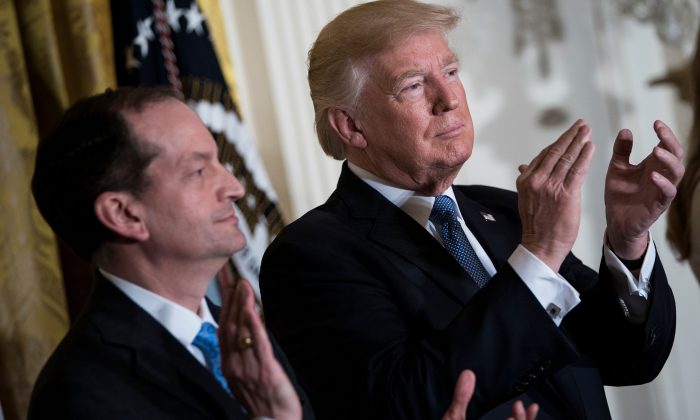 President Donald Trump and US Secretary of Labor R. Alexander Acosta clap during a Hispanic Heritage Month event in the East Room of the White House in Washington on Oct. 6, 2017. (BRENDAN SMIALOWSKI/AFP/Getty Images)
US News

Trump: ‘Communism Is the Past, Freedom Is the Future’

During an Oct. 6 event at the White House celebrating Hispanic Heritage Month, President Donald Trump said his administration is working for prosperity and freedom, and is standing with the people of Cuba and Venezuela against the authoritarian systems of communism and socialism.

“The same failed communist ideology that has brought oppression to Cuba has brought nothing but suffering and misery everywhere and [in] every place it has been, anywhere in the world,” Trump said.

“Communism is the past. Freedom is the future,” he said, to cheers and applause from the crowd.

Communist regimes have killed more than 100 million people over the last century, according to “The Black Book of Communism,” published by Harvard University Press in 1999.  Other estimates, however, suggest the number killed by communism may be closer to 150 million.

The oppressive ideology of communism is based in atheism and struggle. It works by destroying tradition and belief, and by turning people against each other and manufacturing enemies for people to struggle against.

Trump said, “We’re working every day to secure a future of peace, prosperity, and sovereignty for every American citizen, and we hope for a future of freedom and prosperity throughout the entire Western Hemisphere. That’s why, under my administration, we have taken decisive action to stand with the good people of Cuba and Venezuela.”

He noted, “As I announced before a wonderful crowd in Little Havana earlier this year, we will not lift sanctions on the Cuban regime until it delivers full political freedom for the Cuban people.”

Trump also denounced the authoritarian ideology of socialism. “We also stand with the people of Venezuela who are suffering under the ruthless socialism of the Maduro regime. We reject socialist oppression, and we call for the restoration of democracy and freedom for the citizens of Venezuela,” he said, again meeting with cheers and applause.

Communist writer Karl Marx referred to communism as merely a subset of socialism, and former Soviet leader Vladimir Lenin referred to socialism in “Can We Go Forward If We Fear to Advance Towards Socialism?” as a system of “state-capitalist monopoly” that leads to communism.

Benito Mussolini, founder of fascism and a lifelong socialist, also shared similar beliefs. Mussolini described his collectivist systems in his 1928 book “My Autobiography,” stating that “the citizen in the Fascist State is no longer a selfish individual who has the anti-social right of rebelling against any law of the Collectivity.”

Trump noted that his administration is standing against the authoritarian systems of both communism and socialism.

“Many Hispanic-Americans understand very personally why it is so important for us to defend our nation—God-given freedom …, it is God-given freedom,” he said, “and uphold the rule of law.”

“Our commitment to these values has been the source of America’s prosperity, the foundation of our security, and these values have made us a beacon—an absolute beacon—to the nations of the world.

“As we celebrate Hispanic Heritage Month, we are grateful to all of you who have contributed to our communities and for your continued leadership in America,” Trump said. “With your help, we will strengthen our country’s great foundations of faith, and family, and freedom; and we will build together one great American future. It’s a tremendous honor to have you all at the White House.”