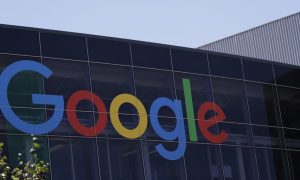 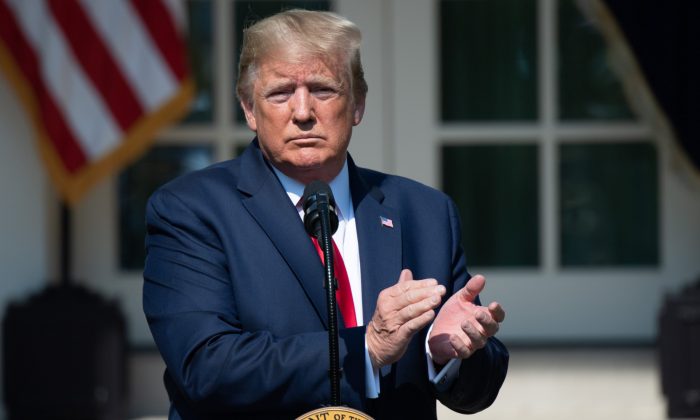 President Donald Trump speaks prior to signing HR 1327, an act to permanently authorize the September 11th victim compensation fund, during a ceremony in the Rose Garden of the White House on July 29, 2019. (Saul Loeb/AFP/Getty Images)
Trump Administration

President Donald Trump cited a former Google engineer who said that the company was working to try to prevent Trump from being reelected.

“Sundar Pichai of Google was in the Oval Office working very hard to explain how much he liked me, what a great job the Administration is doing, that Google was not involved with China’s military, that they didn’t help Crooked Hillary over me in the 2016 Election, and that they are NOT planning to illegally subvert the 2020 Election despite all that has been said to the contrary,” Trump wrote on Twitter on Aug. 5.

“It all sounded good until I watched Kevin Cernekee, a Google engineer, say terrible things about what they did in 2016 and that they want to ‘Make sure that Trump losses [sic] n 2020,’” he added.

Trump late Monday shared clips of Peter Schweizer, president of the Government Accountability Institute, appearing on Fox News to speak with Lou Dobbs and told his followers, “Check out what @Google is up to for the 2020 election!”

Check out what @Google is up to for the 2020 election! #KAG2020 pic.twitter.com/roM2WNmUSP

Referencing the clips, Trump added on Tuesday: “Lou Dobbs stated that this is a fraud on the American public. @peterschweizer stated with certainty that they suppressed negative stories on Hillary Clinton, and boosted negative stories on Donald Ttump [sic]. All very illegal. We are watching Google very closely!”

“You can see bias at every level of the organization,” Cernekee told host Tucker Carlson. “One thing that I’ve noticed is that just handling of routine issues is plagued with bias, like they will get a report, an email from a liberal reporter complaining about something and they will jump on it and they will fix the issue very, very quickly.”

“They made every excuse in the book to avoid taking down something that made Donald Trump look bad. And I saw a number of other incidents just like that,” he added. “They thought Trump should have lost in 2016. They really want Trump to lose in 2020. That’s their agenda.”

Cernekee said in a post on Human Events that he found after joining Google that many employees there were active in politics and the company encouraged the activity.

He said he noticed during the 2016 election cycle that a Google Image search for the name of President Trump’s book, “Crippled America,” would return pictures of “Mein Kampf” instead. He tried getting the issue fixed, he added, but it took nine months.

Google has struggled with internal leaks appearing to show bias at the company. One leaked video showed Pichai, Google’s CEO, and other company leaders bemoaning Clinton’s 2016 loss and discussing how President Donald Trump’s election “conflicts with many” of the company’s values.

Documents leaked recently showed that Google was surreptitiously pushing its political agenda on its users. Even with the string of leaks, Google has tried to claim it is neutral.

Lawmakers have increasingly focused on Google and other large tech companies, and have discussed actions to combat bias and other issues, such as deplatforming.