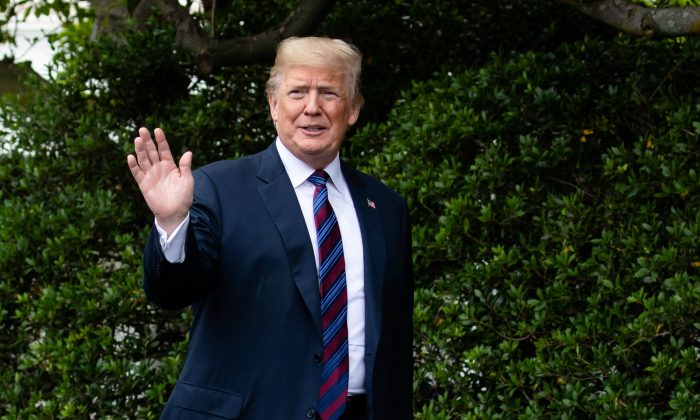 President Donald Trump arrives to participate at the White House Sports and Fitness Day on the South Lawn of the White House in Washington on May 30, 2018. (Samira Bouaou/The Epoch Times)
Trump Administration

President Donald Trump celebrated the selection of the joint bid by the United States, Canada, and Mexico to host the 2026 World Cup.

Trump will no longer be in office in 2026, even if reelected, but he still cheered for the coming of the world’s biggest sporting event.

“The U.S., together with Mexico and Canada, just got the World Cup,” Trump wrote on Twitter on June 13. “Congratulations—a great deal of hard work!”

The U.S., together with Mexico and Canada, just got the World Cup. Congratulations – a great deal of hard work!

FIFA’s delegates voted 134-65 to choose the combined bid by the North American countries over Morocco. The vote took place in Moscow as fans from all over the world poured in for the kickoff on June 14 of the 2018 World Cup.

The vote was the first since FIFA was reformed to feature an open ballot, cast by every member country. In a surprise nod to the United States, Russia voted for the North American bid. China, North Korea, and Syria voted for Morocco.

Previously, votes were cast in secret by a 22-member committee, a process vulnerable to corruption. That selection process was marred by allegations of bribery that resulted in years of investigations.

The 2026 World Cup will be the first to run in an expanded format with 48 teams, up from 32 teams. Sixty of the 80 games will be played in the United States, with Canada and Mexico hosting 10 games each. The eight matches from the quarter-finals to the final will be played in the United States. Of those games, the opening game, the two semifinals, and the final are expected to be as large in terms of attendance and hospitality revenue as the NFL Super Bowl.

The United States last hosted a World Cup in 1994. The event set attendance records that likely will only be surpassed when the championship returns in 2026. The 1994 championship became the most successful in FIFA’s history, with an average of nearly 69,000 spectators attending each game. In total, 3.6 million people attended the games, the most for any World Cup in history, even after the format expanded in 1998.

Brazil won in the final by beating Italy 3-2 on penalty kicks after the two teams drew a 0-0 tie. It was the first World Cup final decided on penalties.

The president of the U.S. Soccer Federation, Carlos Cordeiro, praised the recent vote.

“This is a great day for soccer, for football, and a great day for North America,” Cordeiro said. “We have to appreciate that for the first time in 32 years, we will have the privilege, the pleasure, the honor, to host a FIFA World Cup for men. It goes without saying that we are very humbled about that.”

FIFA expects to collect $14 billion in revenue from the event with $11 billion in profit.

In the eight years between now and the tournament, FIFA will select the final 16 host cities from a pool of 23 proposed in the bid.

The presidents of the three nations’ soccer associations emphasized that their choice to unite for the bid was key to securing the selection.

“When we got together some years ago, we all recognized that we are stronger as a team,” Cordeiro said. “No one country here, even including my own, could have done it by themselves.”