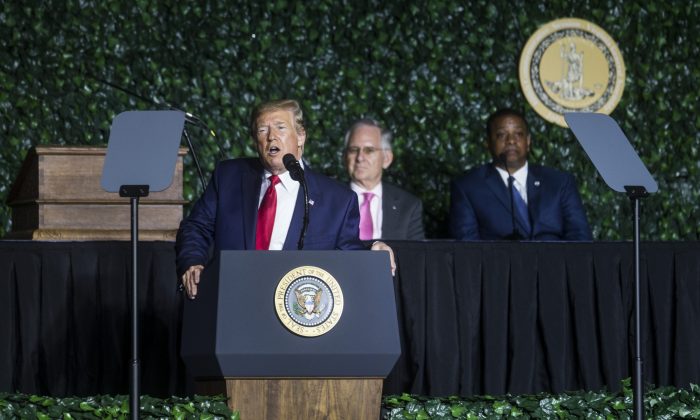 President Donald Trump headed to historic Jamestown, Virginia, on July 30 to commemorate and deliver remarks at the 400th anniversary of the first representative legislative assembly in the Americas.

Trump took to the podium and said it was a tremendous honor to be the first president to address the joint session of the oldest lawmaking body in the Western Hemisphere—the Virginia General Assembly. The event celebrated the birth of American democracy.

“On this day 400 years ago … the first representative legislative assembly in the New World convened,” Trump said. The Jamestown settlement was the first permanent British settlement in the Americas.

“To every Virginian and every legislator with us today, congratulations on four incredible centuries of history, heritage, and commitment to the righteous cause of American self-government. This is truly a momentous occasion.”

The president said, on this same day in 1619, 22 newly elected members of the House of Burgesses assembled in a small wooden church just a mile south of where the event was held. Earlier, the president had toured the Jamestown church.

“Together, the settlers forged what would become the timeless traits of the American character,” Trump said. “Self-government in Virginia did not just give us a state we love—in a very true sense, it gave us the country we love, the United States of America.”

Trump also brought up the horrific slave trade in 1619, when slaves were imported to Virginia.

“It was the beginning of a barbaric trade of human lives,” he said. “Today, in honor, we remember every sacred soul who suffered the horrors of slavery and the anguish of bondage.”

Before heading to Virginia, Trump said on Twitter, “Word is the Democrats will make it as uncomfortable as possible, but that’s ok because today is not about them!”

During the president’s speech, a lone protester stood in the aisle near the front and held up three laminated signs connected together vertically, one with the quote “Deport hate.” Police officers led the man out silently, as a segment of the crowd chanted: “Trump! Trump! Trump!”

The protestor, Ibraheem Samirah, a Democratic Virginia assemblyman, later said on Twitter that part of the reason he disrupted the event was Trump’s “rat-infested” description of Baltimore.

Several African American state lawmakers boycotted the event, but some Democrats still attended. After the conclusion of his speech, Trump praised the event on Twitter and commended lawmakers from both parties for attending.

“Great reception in Jamestown by both REPUBLICANS & DEMOCRATS,” Trump wrote. “Respect for our Country’s incredible Heritage. Thank you!”

Earlier at the White House, Trump told reporters that he’s “the least racist person there is anywhere in the world.” He also doubled down on his criticisms of Rep. Elijah Cummings (D-Md.) and the handling of his Maryland congressional district.

“As you know, Congressman Cummings has been there for a very long time. He has had an iron hand on it,” he said. “The government over the years has pumped in billions and billions of dollars to no avail.”