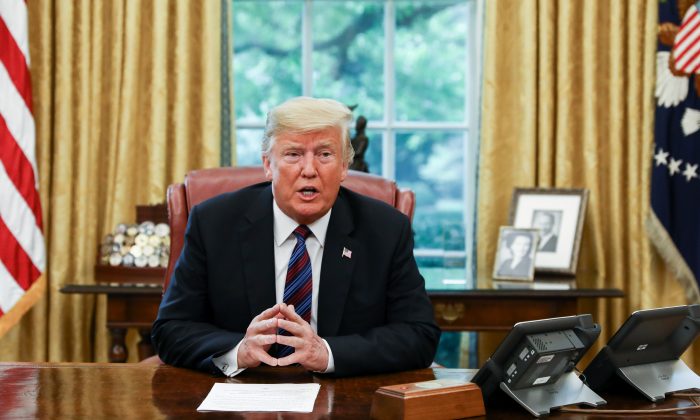 President Donald Trump announces that Mexico has agreed to enter into a new trade deal, the United States-Mexico trade agreement, in the Oval Office of the White House in Washington on Aug. 27, 2018. (Samira Bouaou/The Epoch Times)
Trump Administration

Trump Calls Out Google Over Bias in Search Results

Trump accused the company of predominantly showing news results from the “fake news” media and questioned if the practice was lawful. His economic adviser, Larry Kudlow, later told reporters that the White House would conduct “some investigation and some analysis” at Google, without elaborating further.

“Google search results for ‘Trump News’ shows only the viewing/reporting of Fake News Media,” Trump wrote on Aug. 28. “In other words, they have it RIGGED, for me & others, so that almost all stories & news is BAD.”

“Fake CNN is prominent. Republican/Conservative & Fair Media is shut out. Illegal? 96% of… results on ‘Trump News’ are from National Left-Wing Media, very dangerous. Google & others are suppressing voices of Conservatives and hiding information and news that is good. They are controlling what we can & cannot see. This is a very serious situation—will be addressed!”

Days earlier, the report from PJ Media found that 96 percent of Google search results for news on the president came from liberal media outlets. The report’s findings were gathered from an analysis of Google search results for the keyword Trump” using the search engine’s “News” tab. The data was then compared to investigative journalist Sharyl Attkisson’s media bias chart.

A few of you asked to see my Media Bias chart per a story in The Hill… so here it is. https://t.co/lsnDFYLzxA pic.twitter.com/SAuH3hINNa

Analyzing the first page of results only, The Epoch Times found that 3 out of 27 articles shown in total were conservative, and they all came from a single site: Fox News. The majority of the articles shown were from CNN, Washington Post, and The New York Times, all media with a liberal bias.

The top two results came from the Washington Post and ABC News, followed by Fox News at No.  3. The media outlet that showed up the highest number of times was CNN—appearing a total of six times.

A Google representative didn’t respond to a request for comment on the bias claim by press time.

Aside from Google, other companies with international influence such as Facebook and Twitter have likewise been subjects of criticism over reports that they have censored conservative voices.

Earlier this month, Facebook severely penalized PragerU, a nonprofit organization that produces conservative educational videos, only to remove the penalties and apologize a day later, after saying the sanctions were a mistake. It was the latest apology in a string of similar incidents.

“We just discovered that PragerU is being heavily censored and shadow banned on Facebook,” PragerU social-media influencer Will Witt said in a post.

Shadow banning is a term used to describe the practice by social media platforms of reducing or limiting the visibility of a user’s content.

In January, Project Veritas released a number of undercover videos of current and former Twitter employees, describing to investigators how the company uses an array of tools to identify users with conservative, pro-Trump, pro-America, or even pro-God views and target them for censorship.

Twitter’s CEO Jack Dorsey also admitted in a recent interview with CNN that he himself and most of the company’s employees share a “left-leaning” bias.

In another incident, both Twitter and Facebook reversed a decision to block a campaign video by House candidate Elizabeth Heng, a California Republican, upon “further review.” Her video had included graphic footage depicting the communist genocide in Cambodia—which her parents survived—in the 1970s. Heng argued that her parents’ story had rooted personal relevance.

A key finding listed in a report by NewsBusters, a site launched by the Media Research Center (MRC), found that that the number of liberal Twitter advisors far outnumbered conservatives.

“Twelve of the 25 U.S. members of Twitter’s Trust and Safety Council—which helps guide its policies—are liberal, and only one is conservative,” the report stated.

The report, which investigated how social-media companies have suppressed conservative speech, described what they found as “far more troubling than most conservatives realize.”

Another finding revealed that tech companies such as Facebook and Google have both partnered with “anti-conservative” fact-checking organizations. Facebook’s flagger program had allowed Snopes, PolitiFact and ABC News, all outlets with a left-wing bias, to discern what is and is not real news.