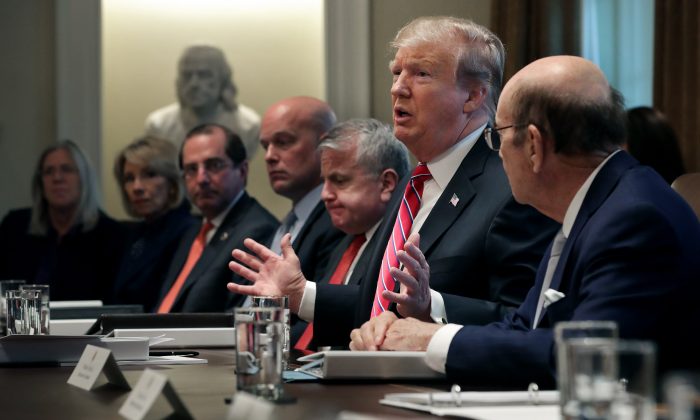 President Donald Trump talks to reporters during a meeting of his cabinet in the Cabinet Room at the White House in Washington on Feb. 12, 2019. (Chip Somodevilla/Getty Images)
US News

Trump Calls on Rep. Ilhan Omar to Resign Over Comments About Isreal

President Donald Trump called for the resignation of new Democratic Rep. Ilhan Omar after she made controversial comments about Israel that some have described as anti-Semitic.

“Anti-Semitism has no place in the United States Congress,” Trump told reporters on Feb. 11.

“It’s terrible what she said and I think she should either resign from Congress or she should certainly resign from the House Foreign Affairs Committee,” he said.

President Trump on Rep. @IlhanMN: “Her lame apology, and that’s what it was, it was lame, and she didn’t mean a word of it was just not appropriate. I think she should resign from Congress.” pic.twitter.com/6rbPUDdFuz

What the president was referring to were comments Omar made in which she implied that a prominent pro-Israel lobby group paid off lawmakers for their support of Israel.

In a tweet on Sunday, Omar wrote the song lyric, “It’s all about the Benjamins, baby,” and she later suggested that money from AIPAC, or the American Israel Public Affairs Committee, drove American politicians to support Israel.

Her suggestions were condemned by both Democrats and Republicans, saying they play into anti-Semitic stereotypes.

Rep. Eliot Engel (D-NY), the chairman of the House Foreign Affairs Committee, stated that it’s “shocking to hear a Member of Congress invoke the anti-Semitic trope of ‘Jewish money.'”

Omar issued an apology, saying she never meant to “offend my constituents or Jewish Americans as a whole,” adding that “we have to always be willing to step back and think through criticism, just as I expect people to hear me when others attack me for my identity,” according to reports.

However, she insisted on talking about the “problematic role of lobbyists in our politics.”

It prompted Rep. Lee Zeldin (R-NY) to issue a statement that it was a “sorry not sorry” apology.

Trump described her apology as “lame.”

“Her lame apology, and that’s what it was, it was lame, and she didn’t mean a word of it was just not appropriate. I think she should resign from Congress,” he told reporters on Feb. 11.

“At a minimum she shouldn’t be on committees. Or certainly that committee,” he added.

On Feb. 12, former Ku Klux Klan leader David Duke publicly backed Omar. Duke responded to the backlash, stating: “So, let us get this straight. It is ‘Anti-Semitism’ to point out that the most powerful political moneybags in American politics are Zionists who put another nation’s interest (Israel’s) over that of America?”

Omar was made aware of his comment on Twitter by a journalist. A tweet by a supporter in response read, “maybe don’t insinuate black Muslims have the support of the KKK?”

Omar responded with no words but used one emoji, of a woman holding a hand to her forehead in seeming disbelief that someone had pointed out Duke’s support for her sentiment.