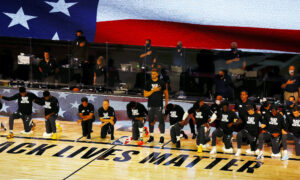 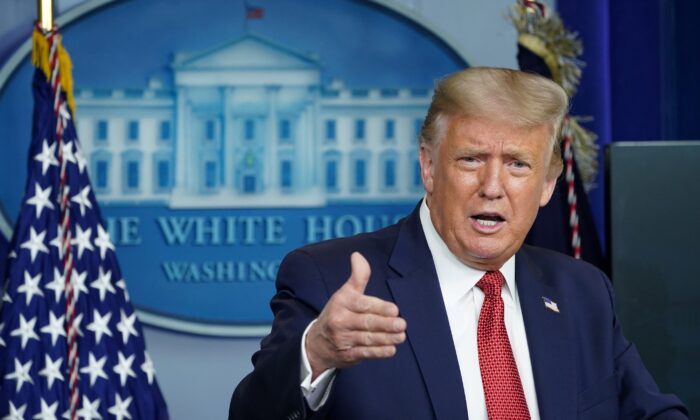 President Donald Trump speaks during a briefing at the White House in Washington on Aug. 10, 2020. (Kevin Lamarque/Reuters)
Trump Administration

President Donald Trump on Tuesday called on sports players to stand for the national anthem, disclosing that he hopes the NFL season doesn’t start if players kneel during the song.

NFL executives, players, and others “want to open and they want to open badly and they’ve been working with government,” Trump said.

“I would say this—if they don’t stand for the national anthem I hope they don’t open. But other than that I’d love to see them open and we’re doing everything possible for getting them open. They can protest in other ways. They shouldn’t protest our flag or our country.”

Trump said NFL owners are well aware of his stance before turning his ire on the NBA.

“I think it’s horrible for basketball ratings. They’re down to very, very low numbers. People are angry about it. … They have enough politics with guys like me. They don’t need more as they’re driving down, going up for the shot. They don’t need it. There was a nastiness about the NBA and the way it was done. I think the NBA’s in trouble, I think it’s in big trouble—bigger trouble than they understand,” the Republican said.

Also indicating his displeasure for professional baseball, Trump said the NHL, a pro hockey league, has “respected what they’re supposed to be doing.”

“You have to stand for your flag, and you have to respect your flag and your country,” he said.

Trump was speaking in an interview with Fox Sports Radio.

Professional basketball players resumed their season last month in Florida. Nearly every player has knelt during the national anthem as part of what the league says is part of an effort “to address racial inequality across the country.”

The league also put the words “Black Lives Matter” on courts and players wear warm-up shirts with the phrase. Players were given the ability to choose one of 29 phrases or words for the back of their jerseys, such as “Vote,” “Listen to Us,” and “AntiRacist.”

Commissioner Adam Silver said the league is not enforcing its rule that mandates standing during the anthem.

Kneeling started in the NFL in 2016. Quarterback Colin Kaepernick said at the time that he wasn’t going to “stand up to show pride in a flag for a country that oppresses black people and people of color.”

The league tried cracking down on what was said to be a form of protest, but ultimately let players kneel during the anthem.

“Without black players, there would be no National Football League. And the protests around the country are emblematic of the centuries of silence, inequality and oppression of black players, coaches, fans and staff. We are listening. I am listening, and I will be reaching out to players who have raised their voices and others on how we can improve and go forward for a better and more united NFL family,” Goodell said.

Most professional baseball players have opted to stand during the anthem before games since their current season started last month, but many players knelt in support of “Black Lives Matter.”

Virtually all hockey players have stood for the anthem in recent weeks, though four knelt last week.

“He probably wanted a change. And I think that he had plenty of teams to go to, and he picked one with, from what I understand, a good offensive line and very good receivers,” Trump said of the 43-year-old’s move from the New England Patriots to the Tampa Bay Buccaneers.