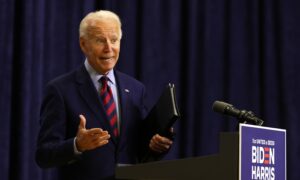 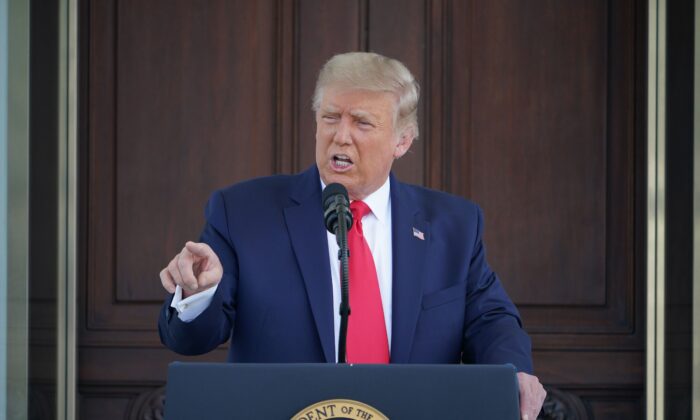 President Donald Trump speaks during a Labor Day press conference at the North Portico of the White House in Washington on Sept. 7, 2020. (Mandel Ngan/AFP via Getty Images)
2020 Election

Trump Calls on Biden, Harris to Apologize for Their ‘Anti-Vaccine Rhetoric’

President Donald Trump demanded on Monday that former Vice President Joe Biden and Sen. Kamala Harris (D-Calif.) apologize for what he called “their reckless anti-vaccine rhetoric,” the latest in an escalating war of words over a COVID-19 vaccine which has the possibility of being approved before or after Election Day.

The president made the demand during the opening portion of his Labor Day speech delivered at the White House. He was apparently responding to remarks by Harris aired on CNN the day before in which the Democratic vice presidential nominee suggested that she would not trust any vaccine developed under the Trump administration.

“Biden and his very liberal running mate—the most liberal person in Congress by the way, who’s not a competent person in my opinion, would destroy this country and would destroy this economy—should immediately apologize for their reckless anti-vaccine rhetoric that they are talking right now, talking about endangering lives,” Trump said.

“It’s political rhetoric,” the president added. “That’s all it is, just for politics.”

In an interview aired on Sept. 6 on CNN, Harris said she would not Trust anything Trump says and would only trust the scientists, who, she predicted, would be suppressed.

“If past is prologue, that they will not, that will be muzzled, they will be suppressed, they will be sidelined, because he’s looking at an election coming up in less than 60 days, and he’s grasping for whatever he can get to pretend that he has been a leader on this issue, when he has not,” Harris said.

Biden has long insinuated that a vaccine developed by the Trump administration may be compromised by political pressure. When the National Institutes of Health (NIH) announced on July 27 that Moderna’s vaccine was the first to enter the third phase of clinical trials, Biden demanded that Trump assure the America people that “the White House will respect the independent authority of the Food and Drug Administration (FDA) to decide, free from political pressure, if the vaccine is safe and effective.”

Moderna’s vaccine could begin to be shipped as early as 2021, with the capacity of delivering up to one billion doses a year. The Trump administration reached a deal in July to secure 100 million doses of the vaccine ahead of the trial’s completion.

The administration has locked in similar deals with the makers of other promising vaccine candidates as part of Operation Warp Speed, which aims to deliver 300 million doses of the COVID-19 vaccines by January 2021.

An approval of a COVID-19 vaccine ahead of the presidential election on Nov. 3 would be a boon for Trump while boosting markets and reviving the morale of a nation, which has been—outside of China—hardest-hit by the Chinese Communist Party (CCP) virus, commonly known as the coronavirus, according to available data.

The Biden campaign has repeatedly suggested that a vaccine developed under Trump may be unsafe. When the New York Times published an anonymously sourced story about potential political pressure surrounding Operation Warp Speed, Biden cited the article in a statement questioning the safety of the vaccine.

“A vaccine compromised by political influence would create health and safety risks, and could further shake the American people’s already weakened trust in our government’s ability to combat this pandemic,” Biden said in a statement on Aug. 3.

Biden doubled down on his comments a month later, insinuating that a vaccine developed while Trump is president can’t be trusted.

In his Labor Day speech, Trump accused Biden and Harris of placing the country in danger by politicizing the vaccine.

“So, contrary to all of the lies, the vaccine—they’re political lies, they’ll say anything and it’s so dangerous for our country what they say—but the vaccine will be very safe and very effective and it will be delivered very soon,” the president said.

National Institute of Allergy and Infectious Diseases Director Anthony Fauci told Kaiser Health News earlier this month that a COVID-19 vaccine could be available earlier than expected. The Data and Safety Monitoring Board could determine that the results at any given point of Moderna’s Phase 3 clinical trial could be sufficient to approve the vaccine.

The board could say “the data is so good right now that you can say it’s safe and effective,’” Fauci said, at which point the researchers would have “a moral obligation” to declare the trial a success early and speed the process of getting the vaccine out to millions of people.

“If you are making a decision about the vaccine, you’d better be sure you have very good evidence that it is both safe and effective,” Fauci said. “I’m not concerned about political pressure.”

The Biden campaign did not respond to a request for comment. The former vice president said earlier in the day that he would take a vaccine produced under the Trump administration even if it cost him the election.

“We need the vaccine. We need it now. As quickly as we can get it. We have to listen to the scientists,” Biden said.