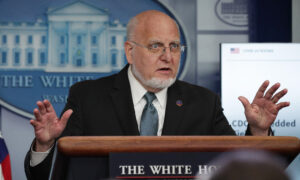 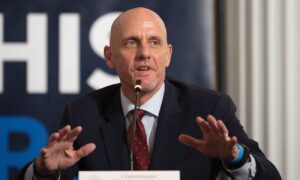 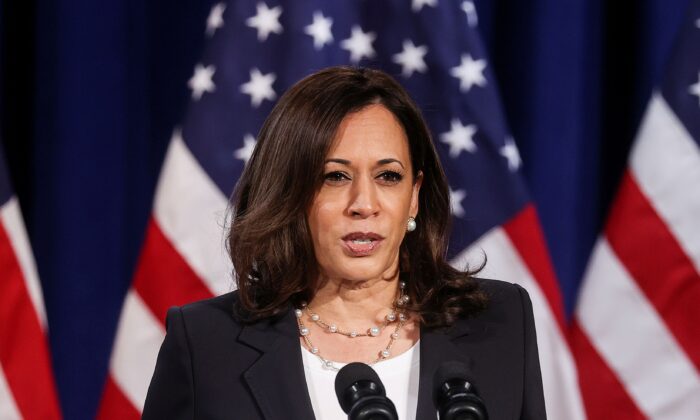 Sen. Kamala Harris (D-Calif.) told CNN’s State of the Union on Saturday that she would not believe anything President Donald Trump says about a new CCP virus vaccine, agreeing with concerns from media speculation, as reported by The Washington Post, that the president is looking to use the vaccine for political capital in the upcoming election.

Instead, Harris said she will continue to look to health experts for information on the efficacy of a potential vaccine. If Trump were to announce that the Food and Drug Administration (FDA) had granted an emergency use authorization (EUA) for a vaccine, she would “not take his word for it” and would have to look to a credible source of information.

“I will say that I would not trust Donald Trump and it would have to be a credible source of information that talks about the efficacy and the reliability of whatever he’s talking about.” she said.

Trump on Thursday said a vaccine could “potentially” be released by the end of October.

Dr. Anthony Fauci, an infectious disease expert and member of the White House Coronavirus Task Force, told Kaiser Health News that in vaccine research, Phase Three of clinical trials can be ended early by members of the Data and Safety Monitoring Board if it finds the interim results of a clinical trial overwhelmingly positive or negative.

He said that if data showed a COVID-19 vaccine to be “safe and effective,” researchers would have a “moral obligation” to end the trial early and accelerate the wider distribution of the vaccine beyond the trial population.

Fauci added that he was “not concerned about political pressure” swaying the decision of the board members—typically experts in vaccine science and biostatistics—who are independent as they are not government employees.

Commissioner Stephen Hahn echoed Fauci’s position on Monday night during an interview with CBS, saying that the “legal, medical, and scientific standard” for granting emergency use for vaccines is not that Phase Three trials are completed, but that the “benefits outweigh the risk.”

“Our emergency use authorization is not the same thing as full approval,” he added.

As to accusations that the FDA is bowing to pressure from Trump to use the vaccine as political capital ahead of the general election, Hahn said, “We have a convergence of the COVID-19 pandemic with the political season, and we’re just going to have to get through that and stick to our core principles,” according to the Financial Times.

The agency has promised it won’t grant an EUA unless the vaccine shows more than 50 percent efficacy in phase three trials—a higher bar than required by law.

Trump has denied that government pressure for faster vaccine distribution is related to the upcoming elections, pushing back against criticism from his political opponents.

It’s “not because of the election,” Trump said of his hopes for a potential release of a vaccine by October. “It’d be nice because we want to save people.”

Despite Trump’s hopeful comments, the head of the administration’s Operation Warp Speed program, Moncef Slaoui, told NPR on Thursday it is “extremely unlikely” a vaccine will be approved before the election as the data from late-stage clinical trials will not be processed.

“There is a very, very low chance that the trials that are running as we speak could [be completed] before the end of October and therefore there could be—if all other conditions required for an Emergency Use Authorization are met—an approval,” he said. “I think it’s extremely unlikely but not impossible, and therefore it’s the right thing to do to be prepared, in case.”

The Centers for Disease Control and Prevention instructed states on Wednesday to start preparing logistics for the widespread distribution of a vaccine by Nov. 1.

The CCP (Chinese Communist Party) virus, the pathogen that causes the COVID-19 disease, has so far killed around 188,000 Americans as of Saturday. Last month, Trump accused the FDA of delaying the rollout of a vaccine before Nov. 3.

So far, the government has spent more than $10 billion on preparing for the rollout of eight vaccine candidates.

However, vaccine deployment faces another challenge, in that, according to a PBS NewsHour/Marist poll, one in three Americans will opt out of receiving a COVID-19 vaccine.

Democratic presidential nominee and former Vice President Joe Biden said on Wednesday, “Why do we think—God willing—when we get a vaccine that is good, [that] works … why do we think the public is gonna line up to be willing to take the injection? We’ve lost so much confidence, the American people, in what’s said [by the Trump administration].”

An independent expert vaccine advisory committee is scheduled to meet with the FDA to discuss COVID-19 vaccines on Oct. 22.

Tom Ozimek and Zachary Stieber contributed to this report.