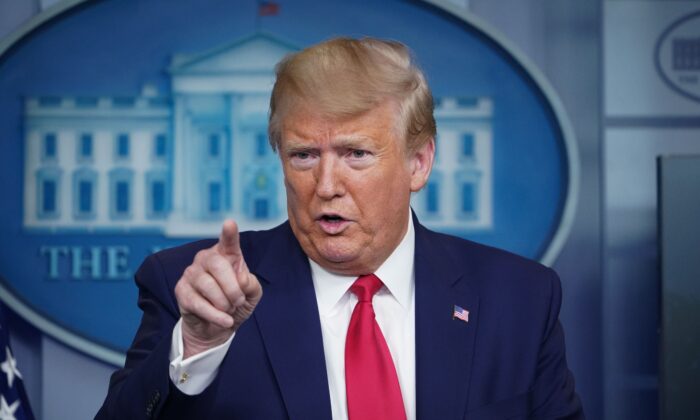 President Donald Trump speaks during the daily briefing on the CCP virus in the Brady Briefing Room at the White House on April 6, 2020. (Mandel Ngan/AFP via Getty Images)
By Petr Svab

President Donald Trump has urged Republican lawmakers to resist pressure to legislate mail-in voting across the country, bringing up the attached risk of voter fraud.

“Republicans should fight very hard when it comes to statewide mail-in voting,” he said in an April 8 tweet. “Democrats are clamoring for it. Tremendous potential for voter fraud, and for whatever reason, doesn’t work out well for Republicans.”

Several Democrats in the Senate, including former presidential candidate Amy Klobuchar (D-Minn.), have said they plan to introduce a bill that would expand mail-in and early voting statewide in light of the CCP virus epidemic.

The CCP virus, also known as the novel coronavirus, broke out in Wuhan, China, around November 2019 and was allowed to spread around the world due to the coverup and mismanagement by the Chinese Communist Party (CCP).

Congress should “ensure that every American has a safe way to participate in our democracy during a national emergency,” Klobuchar said in a March 13 release.

The bill would make states send an absentee ballot to any voter who requests it online for any reason. If the voter doesn’t get the ballot, he or she would be allowed to print out a special federal ballot that’s currently only allowed for overseas Americans and troops.

It would also make states accept any absentee ballots “postmarked or signed before the close of the polls on Election Day” and received up to the last day ballots must be submitted to the state for an official canvass.

Opponents of the bill have argued that it not only makes elections less secure, but is also superfluous.

Two-thirds of the states already provide absentee ballots to any voter who requests one. The rest require a voter to provide a reason, such as travel, illness, injury, or disability.

“As a former election official, I can tell you that there’s not a single election official anywhere in the country who would not consider the coronavirus … a sufficient excuse,” said Hans von Spakovsky, former member of the Federal Election Commission and manager of the conservative Heritage Foundation’s Election Law Reform Initiative.

Absentee ballots are a particular fraud risk, he said, since “they are the only kind of ballots voted outside the supervision of election officials.

“There’s no way to properly supervise and make sure that voters aren’t being intimidated, their votes aren’t being stolen, ballots aren’t being forged—signatures forged—or otherwise altered, so you have to handle them very carefully,” he said.

Election rules should be decided at the state level, as has generally been the case, he said.

“We don’t need the feds coming in and cutting out all of the security measures that states have put in place to handle these kinds of ballots.”

As for resources, the CCP virus relief package passed by Congress has already provided $400 million for additional election-related costs that states may incur due to the epidemic, he noted.

Voter restriction opponents usually argue that voter fraud is so rare it’s not an issue. Spakovsky said the issue hasn’t been investigated well enough to make that conclusion, and pointed to a database of known instances maintained by the Heritage Foundation.